A Chitty Chitty Bang Bang For Everyone! New Flying Car Takes to the Sky 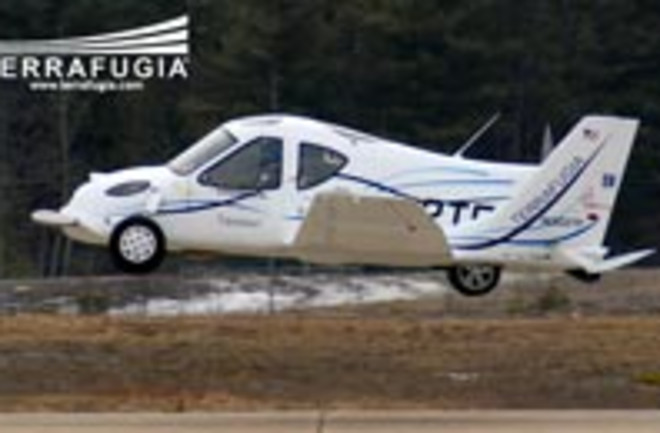 Looking like a cross between a Volkswagon Beetle and a small Cessna airplane, the closest thing yet to a flying car took to the skies earlier this month. The startup company Terrafugia just announced that its "roadable aircraft" performed a successful maiden flight. The vehicle is officially considered a light sport aircraft, but on the ground its wings fold up in 30 seconds allowing for a seamless transition from sky to land. Hence the vehicle's name: Transition. The maiden flight

was short -- just 37 seconds -- and right over the runway, but as Anna Mracek Dietrich, a Terrafugia co-founder and its chief operating officer, pointed out, flying wasn't the key goal. "The first flight is great, but first landing is what matters," she [said]. That apparently went well too, according to Phil Mateer, a retired Air Force test pilot who took the wheel for Transition's debut flight.... "The flight was remarkably unremarkable," Mateer said [Discovery News].

runs on regular unleaded gas, has a steering wheel -- and pilot's telescopic stick, with rudder [pedals] on either side of the gas and brakes [CBS News].

Terrafugia says it can drive at highway speeds on the ground, and cruises at about 115 miles per hour in the air. But despite its familiar car-like features, Terrafugia isn't really marketing it as a Jetsons-style commuting vehicle that will allow drivers to skip over traffic jams--that's not feasible because light aircraft

can't easily be flown through poor weather, bad visibility or [controlled] airspace (as found above cities, for instance) [The Register].

Instead, Terrafugia says the Transition is designed to give pilots more flexibility. A pilot could switch to driving if she hit bad weather, the company says, and could simply drive her plane home and park it in the garage after a flight, reducing storage and transportation costs. The Transition still has to be declared road-legal by the National Highway and Transportation Safety Administration, and must also be certified by the Federal Aviation Administration. But Terrafugia says that after six months of intensive testing, they don't anticipate any major roadblocks (at least, none that the Transition can't fly over). The vehicle that took flight this month was just a proof of concept, but the company hopes to deliver the first vehicle to a paying customer in 2011.

Related Content: 80beats: Swiss “Rocketman” Blasts Across the English Channel DISCOVER: Dude, Where's My Jetpack? asks why we don't all have flying cars and ray guns yet DISCOVER: Chasing the Jetsons wonders if we'll ever have what they have DISCOVER: 6 Blue-Sky Ideas for Revolutionizing the Automobile (photo gallery) Discoblog: Back to the Future: The First Green Flying Car Is Ready for TakeoffImage: Terrafugia