Spacecraft That Sails on Sunshine Aims for Lift-Off in 2010 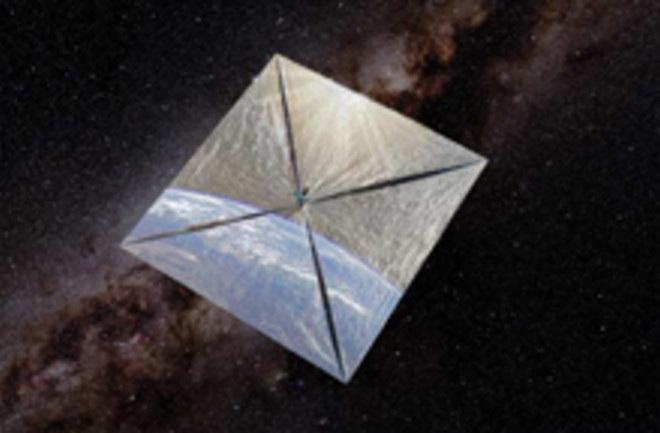 It was a fitting tribute to Carl Sagan's imagination, optimism, and starry-eyed wonder. On Monday, which would have been Sagan's 75th birthday, the Planetary Society announced that it is pushing ahead with a plan for experimental spacecraft that will ride on sunbeams, powered by solar sails. The first small craft will be sent into orbit in 2010, if all goes well, and will be followed by two others, which may venture farther. Sagan was a founder of the Planetary Society and a big booster of solar sail plans. Solar sail technology, which has not yet been tested in space, relies on the tiny impacts created by the light particles streaming from the sun as they hit a reflective surface.

The force on a solar sail is gentle, if not feeble, but unlike a rocket, which fires for a few minutes at most, it is constant. Over days and years a big enough sail, say a mile on a side, could reach speeds of hundreds of thousands of miles an hour, fast enough to traverse the solar system in 5 years. Riding the beam from a powerful laser, a sail could even make the journey to another star system in 100 years, that is to say, a human lifespan [The New York Times].

The spacecraft that is scheduled for orbit in 2010, the LightSail-1, has been made possible by an anonymous donation to the Planetary Society.

The recent donation reinvigorates the Society's solar sail hopes, which were dashed in 2005 when the Russian Volna rocket carrying its first solar sail prototype, Cosmos 1, failed to reach orbit.... In addition to the Cosmos 1 disappointment, NASA's NanoSail-D attempt was lost in the third failed flight of SpaceX's Falcon 1 rocket in 2008 [SPACE.com].