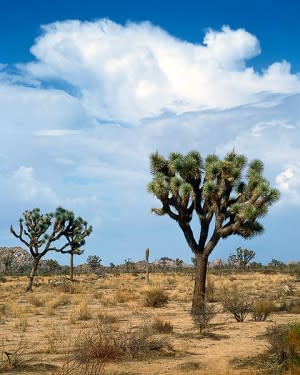 Joshua trees in the Mojave Desert

, but the energy taken from sunlight also has a dark side. Building these plants in the American West destroys large swathes of the desert ecosystem. Cacti must be mowed down and local wildlife displaced to make room for the giant mirrors that will essentially carpet the desert. The LA Times has a great feature on the Ivanpah project

in the Mojave that began construction in October 2010. Far from an empty stretch of sand, the Mojave supports diverse wildlife.

No one knows exactly how the new solar power plant will affect the tortoises, eagles, and Joshua trees that currently inhabit the area. Is it okay to sacrifice the desert in the fight against larger climate change? The situation has put environmental groups in a bind, as Times reporter Julie Cart explains:

The national office of the Sierra Club has had to quash local chapters' opposition to some solar projects, sending out a 42-page directive making it clear that the club's national policy goals superseded the objections of a local group. Animosity bubbled over after a local Southern California chapter was told to refrain from opposing solar projects.

Thanks to support from environmentalists and government, solar energy is a hot investment right now. But the "green" that motivates solar developers may have more to do with money than the environment:

By taking advantage of the available government subsidies, shrewd solar developers can get taxpayers to cover close to 80% of a multibillion-dollar project. The rest comes from investors, attracted by what amounts to a tax shelter. But other companies — often no more than a website and a phone number — obtained solar permits from the federal Bureau of Land Management with no apparent intention other than to sell their place in line. Some gobbled up permits, sat on the land and never turned a spade of soil.