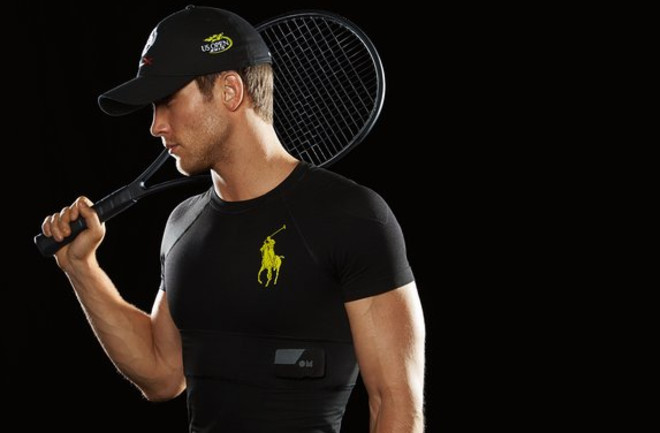 Courtesy: Ralph Lauren Company If you want a peek at the future of fitness tech, keep an eye on the ball chasers at this year’s U.S. Open tennis tournament, which opens today in Flushing, New York. At select matches, ball boys will be sporting compression shirts embedded with sensors and circuits to relay health information to tournament officials. The smart shirts are woven with a silver-coated, conductive thread and contain an ECG, a breathing sensor, an accelerometer and gyroscope. All of the data are fed into the shirt’s “black box” that will beam data to a smartphone app — from which the wearers' heartbeat, breathing rate, stress levels and energy outputs can be displayed.

It's not necessarily that officials are suddenly worried about ball-boys' health — instead, it's a marketing move by Ralph Lauren, who designed the shirts in partnership with biosensor company OMsignal. Ralph Lauren plans to release a full line of “smart” clothing in 2015. In a conversation with the New York Times, David Lauren, marketing and communications director for the Ralph Lauren company and son of the designer, said that that line of smart clothing will include both athletic wear and classic dress shirts. He told the Times:

“Everyone is exploring wearable tech watches and headbands and looking at cool sneakers... We skipped to what we thought was new, which is apparel. We live in our clothes.”

The idea of having detailed metrics on your daily health is definitely appealing, and is the draw of lots of activity trackers already on the market. And at least, in a real-world deployment of Ralph Lauren's shirts you'd have one advantage over the ball boys: prying eyes won't be watching your stress levels in real-time. For the ball boys' sake, we just hope one of these doesn't happen: