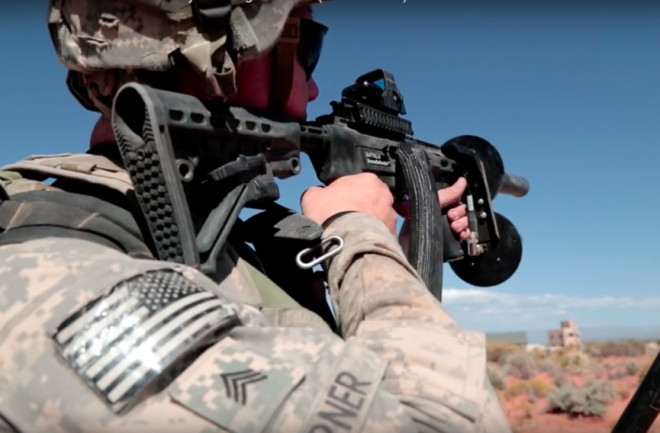 A U.S. Army soldier uses the Battelle DroneDefender to practice taking down drones during a military exercise. Credit: Battelle Military drones such as the U.S. Predator and Reaper have soared above battlefields for more than a decade. But small consumer drones that anyone can buy online have also begun to make their presence felt in modern battlefields. The militant group Islamic State has begun turning such small drones into flying bombs in their battles across Syria and Iraq. Islamic State has used ordinary camera-carrying drones for surveillance and to film their suicide car bomb attacks for years. But the militants have more recently begun weaponizing the small drones by packing them with explosives, according to the New York Times. In October 2016, one such weaponized drone killed two fighters belonging to the Kurdish forces battling Islamic State in northern Iraq. The Kurdish fighters had shot down the drone and were disassembling it when its explosive payload went off. Another Islamic State attack used a drone carrying explosives to destroy a number of buildings at a military checkpoint. The idea of using drones this way is not new. The U.S. military has already been using small "kamikaze" drones such as AeroVironment's Switchblade that acts like a tiny guided missile capable of loitering above a target area. Once a target is spotted, the Switchblade dives down from above and explodes. AeroVironment already faces stiff competition for the U.S. Army's portable killer drone contract from rivals such as Lockheed Martin's Terminator, Textron's Battlehawk and a Hero drone developed by the Israeli firm UVision and U.S. defense giant Raytheon, according to Popular Mechanics. So perhaps Islamic State's improvised version of these drone attacks should not come as a surprise. The more troubling aspect of Islamic State's weaponized drone demonstration comes from showing how just about anyone can turn an ordinary consumer drone into an explosive weapon. Such improvised flying bombs have fewer capabilities than the Switchblade or similar drones developed by defense contractors, but they can still perform a roughly similar function at a much cheaper cost. It's also the type of weapon that could theoretically be used for a terrorist attack as well as a military weapon. Islamic State's use of weaponized drones has only become more consistent during the recent offensive by Iraqi and U.S. forces to recapture the Iraqi city of Mosul, a U.S. general said during a Pentagon briefing from Baghdad. The general mentioned how Islamic State has been using drones for surveillance, as "Trojan Horse" bombs similar to the one that killed the Kurdish fighters, and even to drop explosive devices, according to Bloomberg News. The U.S. military has rushed to develop defenses against such small weaponized drone threats in recent years. Not long after the drone attack that killed the Kurdish fighters, U.S. Air Force Secretary Deborah Lee James mentioned that the Air Force had used an electronic weapon to bring down a weaponized drone operated by Islamic State, according to DefenseTech. https://www.youtube.com/watch?v=z5XcXwKNZ5g U.S. troops in Iraq are supposedly already using the Battelle Drone Defender device that can disrupt drone operations by interfering with their GPS and the control links with the drone operators. Similar anti-drone rifle technologies will likely only become more familiar sights in the hands of both soldiers and U.S. law enforcement.