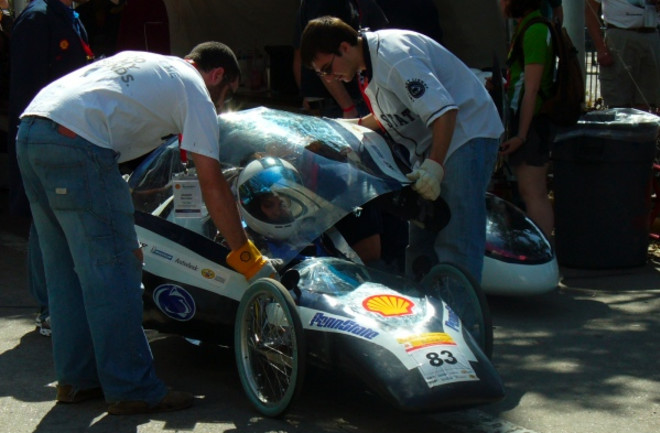 The last-minute repairs, friendly competition, racing out to the track to get in that last run that might just be the one—that's all over. And the dancing of the "Electric Slide" in the awards banquet hall has begun. It was an up-and-down day. Penn State's hydrogen fuel cell, HFV, drove like a champ and achieved the equivalent of 1,803 miles per gallon. But they couldn't quite claim the number one spot. "We kept going back and forth with Cicero" says team member John Bearer, referring to the fuel cell champion Cicero North-Syracuse High School. Bearer wasn't too disappointed, though, as the competition is far from cutthroat: At the very end, Northern Arizona gave up its final spot in line to Cal Poly, whose crew yearned to take a last shot at a better mileage number. The fuel cell car from Missouri, however, never managed to finish the 10-lap race and get a number on the board. They were on pace for 300 MPG equivalency, but halfway through runs, the computer system registered errors and the car shut down. In a nice nod, though, the Tigers took home the "perseverance in the face of adversity" award. Canadian team Université Laval won the overall prize for all the cars, excluding solar, with 2,488 MPG. One of the cars by team Rose-Hulman, who we profiled earlier, won third in prototype combustion engines with just more than 1,800 MPG. But the Purdue Polaris, which we profiled yesterday, achieved a best result of 4,548 MPG equivalency. It also took home the People's Choice Award with nearly 100,000 votes, and the design and communication awards. You can see all the results here. And tomorrow we'll be bringing you a slideshow of the best images from Shell Eco-marathon 2010.