Shell Eco-Marathon: All the Aerodynamics You Can Muster, Mister 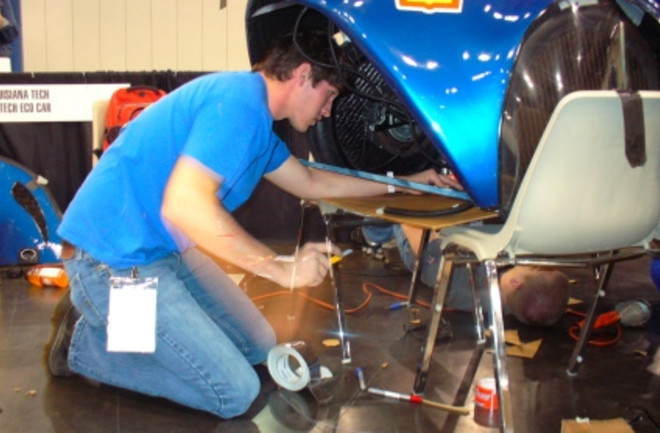 Time is short. Only two windows of urban concept racing time remain, and though Louisiana Tech's last run in its blue car jumped the score from 173 miles per gallon up to 251, they still lag behind leader Mater Dei High School of Evansville, Indiana. So it's time to pull out all the stops. In the "garage," Tech crew members count down the time until they must be back out on the track. In the waning minutes, crew member Beau Downey tells me all they can do to try to close the gap on the MPG leaders is streamline how air flows around the car. First, he says, they're trying to smooth out the car's undertray. While the overall carbon fiber body cuts through the air nicely, he thinks the air coming under the car gets caught and causes drag.

Louisiana Tech has sheets of plastic they brought down in case they needed to redo the car's tinted windows. But in these last few moments it's time to forget about that and cut the sheets into shells that cover the wheel wells, with the idea that passing air won't be able to get in there, either. Missouri, too, is feeling the heat. As we mentioned in our first post yesterday, the Tigers had quite an ordeal just getting a working car to Houston. During test runs yesterday, however, a connection came loose after just five of the 1o laps. Back in the shop, they've found the faulty connection, and race to repair so they can hit the road this afternoon and get a score on the board before competition ends in the evening.