The ultra-elastic, frozen microfibers could teach us more about what happens when ice changes phases. Someday, they may even be used in the coldest places on Earth — or beyond. 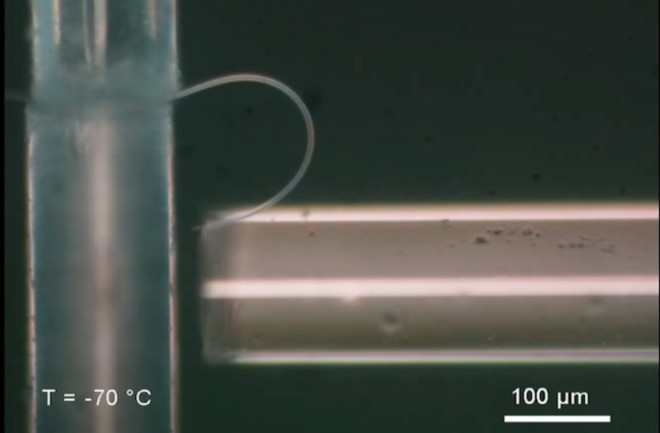 When it comes to the topic of microfibers, researchers no longer need to “break the ice.” Thanks to a new discovery in nanomaterials, they can now bend it instead.

“Our group had been working on silica microfibers for 20 years,” says Xin Guo, an optical scientist at Zhejiang University in China and one of the authors of a study published in Science this summer. Now, her team has become the first to grow microfibers with flexible ice that can bend back upon themselves — without fracturing.

Ice is known for being a brittle substance, mostly due to imperfections in the structure of its crystals. But scientists still don’t fully understand what‘s happening on a molecular level when ice changes to water and vice versa. The optical properties of the new, ultra-elastic ice microfibers could reveal new insights.

The researchers created the microfibers by cooling down a tungsten needle (which narrows to the thickness of a single atom and is the sharpest object ever made) in a special chamber to about –60 degrees Fahrenheit, Guo says. That’s colder than any other previous experiment of this nature. The team then used an electric field to draw water vapor to the needle tip. As the vapor froze there, it formed a microfiber about 5 micrometers in diameter and about 1 millimeter in length.

“It’s very thin and very short,” says Limin Tong, also an optical scientist at Zhejiang University and a co-author of the study. Guo adds that the fiber was formed with single crystal ice. “We fabricated [a] high-quality ice microfiber with a uniform structure,” she says.

The researchers then lowered the temperature even more, to between –94 degrees and –238 degrees Fahrenheit. When they tried to bend it, they found their experiment had worked. The resulting fiber could bend up to a maximum strain of 10.9 percent — much more than regular ice and close to the 15 percent theoretical maximum elasticity of ice, though nobody has ever achieved anywhere close to that. It also bounces back to its original form.

“It’s just like some magic,” Tong says of the initial attempt to bend the material. “Normally we don’t have perfect ice crystals. Now we have a kind of microfiber with a very uniform character.”

While “cool” in and of itself, bendable ice can also be useful. The researchers sent light through the ice microfiber, which is very clear, and found that it worked just as well as the silica fibers often used to transmit information via light. Guo and Tong believe these kinds of fibers might also find use in detecting viruses or other microbes; by placing tiny organisms on the microfibers and guiding light through them, we could learn more about the concentration, density or types of microbes that might be present.

In the future, the team will also work on building sensors that are compatible with the bendy ice. Of course, this fiber melts at roughly 14 degrees Fahrenheit — meaning it might not be useful in many situations. “That is a very often used temperature in laboratories,” Tong says, “and also in some kinds of ice cream.” But researchers in the polar regions, or in space, could make use of them due to the inherently low temperatures.

Perhaps most importantly, light shined through these frozen fibers could help researchers study what happens when ice changes phases. Because a phase change can be brought about simply by bending the microfiber, doing so could reveal more about how ice crystals form, why they form the way they do and what molecules are involved.

For now, the next step is to determine if longer ice microfibers can be created. "We have a lot of mysteries that are still unknown to us as scientists," Tong says.