Scamming Social Media with Crowdsourcing is a Million-Dollar Business 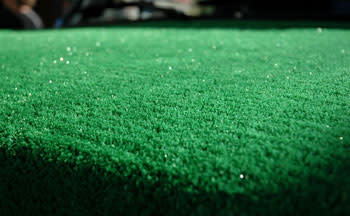 This is not real grass. And that's not a real comment, either.

Most stories written about online crowdsourcing

discuss the philanthropic aspects of people around the world pitching in on a task, like helping out in a study

or identifying photographed objects for the blind

. Sure, the microtasks are usually tedious, but they need humans to do them and they provide an income stream, albeit a small one, to people who have no other way to make a livelihood. It's all good, right? Well, as it turns out, there are other, darker tasks that only humans can do. Specifically, writing spam comments, participating in online discussions to promote brands, making new social media profiles specifically to skew the conversation on a particular topic, and other, similar practices that UC Santa Barbara professor Ben Zhao calls "crowdturfing." (That's a portmanteau of "crowdsourcing" and "astroturfing

," the process of faking grassroots involvement.) As detailed in an ArXiv paper

, Zhao and colleagues found that this "evil crowdsourcing on a very large scale" consumes the vast majority of business on crowdsourcing sites: On the second-largest such site in the US, ShortTask, 95% of the transactions were crowdturfing (the largest, Amazon's Mechanical Turk

, which actively roots out such tasks, had 12%). Zhubajie and Sandaha, major Chinese crowdsourcing sites, turned out to be 88% and 92% 'turfing tasks, with more than a million dollars paid for crowdturfing each month on Zhubajie alone. And the business is growing roughly exponentially, Zhao told Tom Simonite of Technology Review

. It's already a big problem in China, where legitimate use of social networks like Weibo, China's version of Twitter, is hampered by the profusion of spam messages. You don't need real people to drown out voices of dissent, as the recent use of tweetbots to obscure messages from Russian election fraud protestors attests

, but using real accounts belonging to shills makes spam much harder to recognize. As crowdturfing becomes more common, it might have to be fought with the same techniques currently being considered to stem email spam: convincing credit card companies and banks to refuse service to known spammers

. Earlier this year a study

found that 95% of email spam revenue went through just three banks; there may be a similar bottleneck in crowdturfing. [via Technology Review