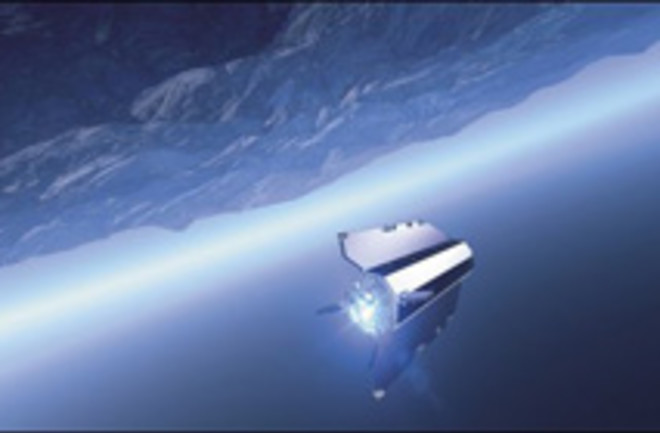 A sophisticated satellite has been carefully placed into orbit just beyond the Earth's atmosphere, and this week engineers

switched on the super-sensitive instrument that will make ultra-fine measurements of Earth's gravity. The sophisticated gradiometer will feel the subtle variations in Earth's tug as it sweeps around the globe [BBC News].

The GOCE satellite, built by the European Space Agency (ESA), was launched on March 17, and mission controllers are now busy testing instruments and its cutting-edge propulsion system. In August or September, they will begin the scientific mission. Because the Earth's mass is not distributed evenly around the planet (think of the mountains and the oceanic rifts), its gravity is not uniform. Mapping these variations

has many applications but perhaps the biggest knowledge gains will come in the study of ocean behaviour. Understanding better how gravity pulls water - and therefore heat - around the globe will improve computer models that try to forecast climate change [BBC News].

The satellite will settle into an orbit just 163 miles above the Earth's surface.

But this orbit will also subject GOCE to the drag of tenuous gas at the edge of Earth's atmosphere. If its orbit were uncorrected, the probe might only last a few months before falling back to Earth.... To counteract this drag, the satellite has an aerodynamic shape and an ion-propulsion engine [New Scientist].

The engine will fire tiny bursts to keep the satellite in a stable orbit.

ESA explains: "This cutting-edge system does not burn fuel like a regular rocket motor. Instead, it is supplied with xenon from a 40-kg tank, which is converted to fast-moving ions - naked xenon atoms that have had some of their electrons stripped away by an electric discharge generated from solar energy. The ions are ejected toward the rear, giving a very gentle, steady and smooth thrust" [The Register].

Related Content: DISCOVER: Gravity: how does it work on the smallest scale? DISCOVER: A Graceful Look at Earth's Gravity DISCOVER: Nailing Down Gravity explores what we don't know about the force Image: ESA