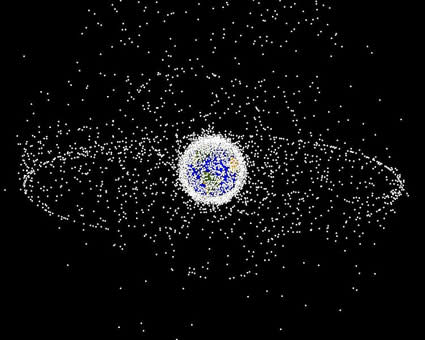 Yesterday, the Russian space agency Roscosmos confirmed news from last week that they are pursuing plans to spend $2 billion cleaning up space debris. In a striking contrast to the secrecy that once cloaked space programs, the confirmation came via an announcement on Roscosmos's official Facebook page:

Russia will build a special orbital pod that would sweep up satellite debris from space around the Earth.The cleaning satellite would work on nuclear power and would be capable to work up to 15 years. Energia said in a statement that the company would complete the cleaning satellite assembly by 2020 and test the device no later than in 2023.

is the Russian space corporation that builds the nation's rockets, space station components, and more. Previous reports stated that the aim of the pod would be to intercept 600 dead satellites and push them out of orbit, allowing them to burn up in the earth's atmosphere or splash down harmlessly into the ocean. The pod will most likely have a nuclear core that powers an ion drive

, in which accelerated ionized gas particles would provide thrust to the pod as it makes it way from debris chuck to debris chunk. The pod would then nudge the decrepit and dangerous satellites out of their orbits, sending them spiraling towards the earth. The first burst of news last week, which came from the Chinese news agency Xinhua

in response to a report by Russian news agency Interfax, also noted the space agency's plan to build a comet interceptor, which could be powered and controlled in the same way, to protect the earth from wayward chunks of rock that might be headed in our direction.

Of course, the technology for both a debris pod and comet interceptor would also make those particular spacecraft very potent anti-satellite weapons in a hypothetical space war. But we're probably better off not thinking too much about that. [Fast Company]

Related Content: DISCOVER: Space Junk: How to Clean up the Space Age's Mess

80beats: For a Real Blast, Strap a Nuclear Reactor to a Spaceship

80beats: Experts Declare War on Space Junk… So What Do We Do Now?