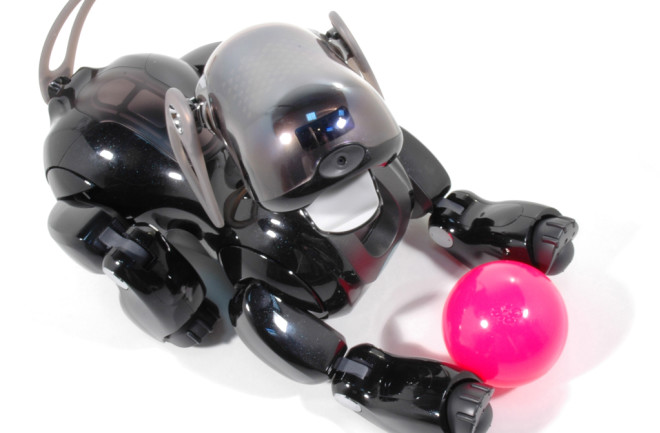 An AIBO robot dog. Credit: Sony Corporation A Japanese funeral service held for broken AIBO robot dogs may seem strange in the eyes of many Westerners. Owners of AIBOs often treat their robots as beloved pets and family members rather than just machines—an openness that arises in part from Japan's cultural attitudes toward robots. But the robot funeral also reflects more universal tendencies of human psychology that go beyond Japanese culture. The memorial service for the AIBO robots took place at the 450-year-old Kofukuji temple in Isumi, Japan in January 2015, according to Agence France-Presse. Such robots are among the last of a product line made by Sony Corp. from 1999 to 2006. Sony eventually discontinued maintenance service in March 2014, which forced AIBO owners with ailing robots to seek help from repair shops that employ former Sony engineers and technicians, The Wall Street Journal reports. A group of broken-down robot dogs whose human owners had died eventually ended up on the altar of the Buddhist temple, where a priest prayed for their souls to pass on peacefully and reunite with their owners. "Although Japan is a highly secular culture, it is not one that denies or negates the spiritual," said Karl MacDorman, a robotics researcher at Indiana University. Western societies don't generally seem to embrace robots, let alone robot funerals, as warmly as Japan does. But extreme circumstances, such as those found on battlefields, have forged powerful human-robot relationships within the U.S. military that have also led to robot funerals. As we'll see later on, the bond between U.S. soldiers and their battlefield robots can appear strikingly similar to the relationship between Japanese AIBO owners and their cute robot dogs.

MacDorman previously looked at the difference between Japanese and Western attitudes toward robots in a paper titled "Does Japan really have robot mania?" in the 11 April 2008 issue of the journal AI & Society. He noted that Western philosophy and Judeo-Christian views tend to consider both mind and soul as being distinct from the body. That stance makes it difficult to think of machines built by humans as having their own minds or souls. By comparison, the influence of Buddhism and Shinto on Japanese culture makes it easier to find similarities between humans and robots rather than differences, MacDorman explained. For instance, Buddhism sees everything as "devoid of selfhood or intrinsic nature" because it all arises from causes and conditions; the goal is to achieve enlightenment by seeing through our conditioned existence. Masahiro Mori, the Japanese roboticist who developed the idea of the "uncanny valley," once proposed that robots could pull their workings into alignment to realize their Buddha-nature. At the same time, Shinto's animist beliefs suggest that spirits can inhabit objects such as stones or trees. Such beliefs have influenced the modern Japanese view of robots. In 1928, Makoto Nishimura, a Japanese robotics pioneer, suggested the following: "If one considers humans as the children of nature, artificial humans created by the hand of man are thus nature’s grandchildren." MacDorman points out that both Buddhism and Shinto helped shaped the cultural attitudes of modern-day secular Japan, even if most Japanese probably don't believe in the "literal truth" of either religion. MacDorman summarized some of the reasoning behind Japan's robot dog funeral:

"I see two cultural forces at play in the wish of some Japanese to have funerals for Aibos. First, Shinto—the original religion of Japan—views stones and other inanimate objects as possessing a soul or consciousness. Second, Japanese are open to the view that consciousness arises by means of physical processes, such as information processing. Thus, a robot does not seem so different from a human being given that both are physical objects that process information. This contrasts with the religious traditions of the West that create a sharper distinction between humankind, created in God’s image, and the rest of creation. For example, under the Catholic doctrine that a soul enters the body at conception, it is hard to find room for machines to have souls."

Many AIBO owners clearly see some sort of life or soul essence in their robot dogs. Peter Kahn Jr., a psychologist at the University of Washington in Seattle, examined the attachment between AIBO owners and their robotic pets in a 2004 study titled "Social and Moral Relationships with Robotic Others?" By surveying the postings of AIBO owners in online forums, Kahn and his colleagues found that 75 percent of owners considered AIBO as being more than a machine. As many as 60 percent of owners also thought AIBO could somehow express its mental state. About 48 percent of owners said that AIBO had a life-like essence, and 38 percent said that AIBO had feelings.

But the Japanese aren't alone in viewing their robots as having human-like qualities worthy of respect. Peter Singer, a strategist and senior fellow at the New America Foundation, writes about U.S. soldiers forging powerful bonds with their battlefield robots in the 2009 book "Wired for War." He describes how U.S. soldiers in explosive ordnance disposal (EOD) squads often name their bomb disposal robots, give them military promotions and even award them with "purple heart" medals for being "wounded" in combat.

Credit: U.S. Army photo by Sgt. Michael J. MacLeod The battlefield robots used by EOD squads don't look nearly as cuddly as AIBO robot dogs. They typically resemble rugged machines with extendable arms and cameras sitting on top of wheels or tank-like treads. But soldiers still grew close to their robot "buddies" as they worked alongside them to disable roadside bombs under life-threatening circumstances. In one case, a U.S. soldier risked his life to save a robot that had been knocked out of action in Iraq; he ran more than half the length of an American football field under fire from an enemy machine gun to retrieve the damaged machine. Such an action would have probably horrified military planners and the robot's designers, who generally see battlefield robots as disposable units that can be sacrificed to save human lives. But the action also reflects the powerful bond that had formed between the human soldiers and their robots. Military personnel who ran the robot repair shops in Iraq often described the experience as being more like a doctor in an emergency room than a mechanic in a garage. They recall seeing fear in the eyes of soldiers who brought in their damaged robots, and later receiving hugs and handshakes after they successfully "save" the mechanical lives of the broken-down machines. It's eerily similar to the experience of Hiroshi Funabashi, a supervisor at the Japanese company A FUN, which employs former Sony engineers to repair AIBO robot dogs. Funabashi told

that AIBO owners see him as more of a doctor than an engineer. Some squads even held funerals for their fallen robot comrades, according to Julie Carpenter, a researcher with a Ph.D. in education from the University of Washington in Seattle. Carpenter interviewed a number of EOD squad members from every branch of the U.S. military about the relationships they forged with their robots. When news publications publicized her research, some U.S. military personnel began sharing their own stories of military robot funerals on the website Reddit. One person mentioned a robot funeral that came complete with a 21-gun salute; an honor normally reserved for fallen human leaders and heroes. Such gestures of respect by U.S. military personnel almost make Japan's robot dog funeral pale by comparison. "To view the robot that fought with them, and even saved their lives, as just a 'thing' is almost an insult to their own experience," Singer writes in his book. In the end, both the broken U.S. military robots and the AIBO robot dogs did go on existing in different forms. Blown-up U.S. military robots were often cannibalized to build or repair functional robots. And the AIBO robot dogs won't rest in the Buddhist temple forever; they too were disassembled for spare parts to help their surviving robot brethren.