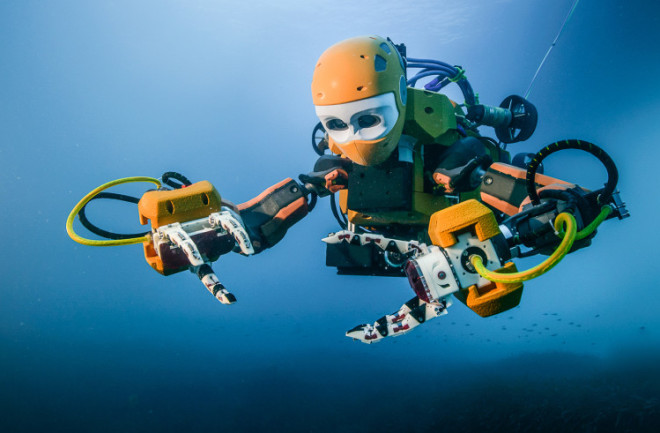 OceanOne on its dive exploring the ship La Lune. (Credit: Frederic Osada and Teddy Seguin/DRASSM) When it comes to performing delicate operations, it's hard to beat a pair of human hands. However, extreme environments aren't exactly hands-on places. When Stanford researchers were building a diving robot they decided to put two human-ish hands at the ends of its arms. And then, to further meld human with machine, they connected the robotic hands to a human counterpart on the surface. A range of haptic sensors provides near-instantaneous feedback to the operator about the weight of an object or how hard the grip is. The robot, called OceanOne, could be used for underwater excavations and conducting dangerous repairs on oil rigs. Really, OceanOne's services could be deployed anywhere a pair of (almost) human hands would come in ... handy.

It's All in the Hands

Researchers at Stanford University originally designed the anthropomorphic robot with coral reefs in mind, but its skills translate easily to treasure hunting. [embed]https://www.youtube.com/watch?v=p1HmgP9l4VY[/embed] Researchers studying the endangered ecosystems need to access depths that are beyond what's safe for human divers, and conventional ROVs don't have the sensitive touch and dexterity necessary to handle delicate corals. So, computer science professor Oussama Khatib and his team created a pair of articulated appendages modeled on human hands that provide detailed information about their environment. Not only can the hands safely manipulate delicate objects underwater, the haptic sensors make them feel like a natural extension of the human operator by relaying sensory information to the surface, where it gets replicated by the haptic interface. OceanOne features a humanoid upper body complete with a head, torso and arms. Its lower body, or "tail", is where the batteries, computer and thrusters are located. The head contains two cameras where you'd expect the robo-mermaid's eyes to be, which allows for stereoscopic vision. A computer algorithm aids in navigation, and also regulates the robot's grip to ensure it doesn't smash or drop priceless archaeological artifacts.

OceanOne recently showed off its underwater chops when it swam through the sunken wreckage of a French warship called the La Lune. The ship wasonce the flagship of King Louis XIV, and entered Davy Jones' Locker in 1664. The site is too deep for human divers to reach and too constricted for submersibles to enter, but OceanOne navigated the treacherous site with ease, retrieving a small vase as proof of its success. Khatib even got a chance to show off the robot's unique capabilities during the dive when OceanOne got stuck between two cannons — he brought the arms around and performed an underwater push-up to free the craft. Robotic submersibles have probed the depths of the oceans for decades now, but the researchers say OceanOne's articulated hands and haptic feedback sensors could help open up a range of new sites to explore.