Researchers Work Towards a Shirt That Can Take Pictures 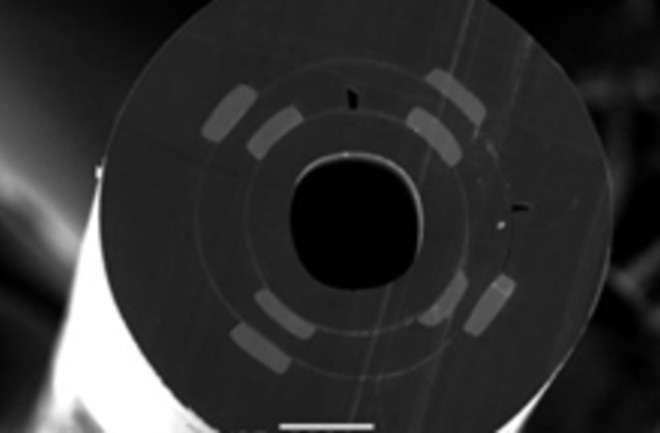 Researchers have created a fabric that acts like a camera, made of tiny light-sensitive fibers that turn light waves into images. Says lead researcher Yoel Fink:

"While the current version of these fabrics can only image nearby objects, it can still see much farther than most shirts can" [LiveScience].

Fink notes that the technology does away with one of the most basic camera components: the lens. Just like in an eye, cameras use a curved lens to focus the light waves reflected off an object, but the system contains

an Achilles' heel: Damage the lens, and you lose or diminish the ability to see [ScienceNOW Daily News].

By getting rid of the lens, researchers say they can develop a technology that is less vulnerable to damage--if one part of the fabric gets damaged, the rest can still function.

"We are saying, 'instead of a tiny, sensitive object [for capturing images], let's construct a large, distributed system,'" Fink said [LiveScience].

As researchers report in the journal Nano Letters, each individual fiber measures less than a millimeter in diameter.

The fibers consist of an array of metal electrodes connected to a semiconductor and are covered by an insulating polymer sheath. The semiconductor layer in the fiber detects light and relays signals via the electrodes to a microprocessor, which combines the signals from an array of the fibers to determine the light's intensity, direction, and color. Visualization software then takes that data and recreates the source image and displays it on a monitor screen. And the whole process is accomplished without a lens [ScienceNOW Daily News].

To test their device, the research team illuminated a picture of a smiley face from behind, and placed a scrap of the futuristic fabric in front of it. The fibers measured the intensity of the light reaching them, and also distinguished between different wavelengths (or colors); when the data was fed into a computer an image of a smiley face popped up on the screen. Researchers say the technology could one day find military applications, like a uniform that can record the action all around a soldier and give him a 360-degree view. Related Content: 80beats: “World’s Fastest Camera” Snaps 6 Million Pictures in a Single Second DISCOVER: Stopping Time steals a glimpse of a billionth of a billionth of a second DISCOVER: A Single Electron is Caught on Film Image: Fink lab, Massachusetts Institute of Technology. The cross-section of a fiber.