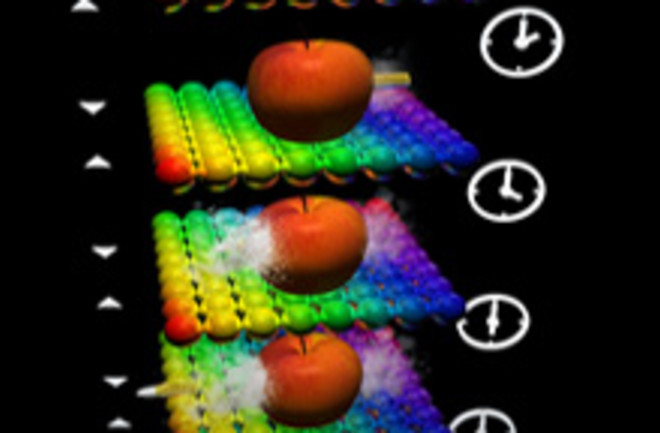 Optics researchers have invented a camera that uses infrared lasers to bounce light off an object, and say the result should leave shutterbugs with a serious case of technology envy. Their device can

take 6.1 million pictures in a single second, at a shutter speed of 440 trillionths of a second. Light itself moves just a fraction of a centimeter in that time.... "It’s the world's fastest camera" [Wired],

Conventional digital cameras use charge-coupled devices (CCDs) to take a picture. The devices contain semiconducting chips that ... produce electrons in response to light. The electrons are read off the chip and their signals are then electronically amplified and encoded as a digital image [Nature News].

But that process has its limits. Top-notch conventional cameras top out at about 30 frames per second, while the fanciest scientific instruments can take about one million frames per second. For Goda and his colleagues, that just wasn't fast enough. To make the serial time-encoded amplified microscopy (STEAM) camera, described in an article in Nature, researchers fired an infrared laser beam and spread out the light pulse to form a spectral pattern. As demonstrated in a video explaining how STEAM works, the researchers

The photodetector records when each wavelength arrives, and that simple data set is used to reconstructs an image of the object.

The camera could be used for studies of combustion, laser cutting and any system that changes quickly and unpredictably. "I would imagine that STEAM would be useful for any scientist," Goda says [Nature News].