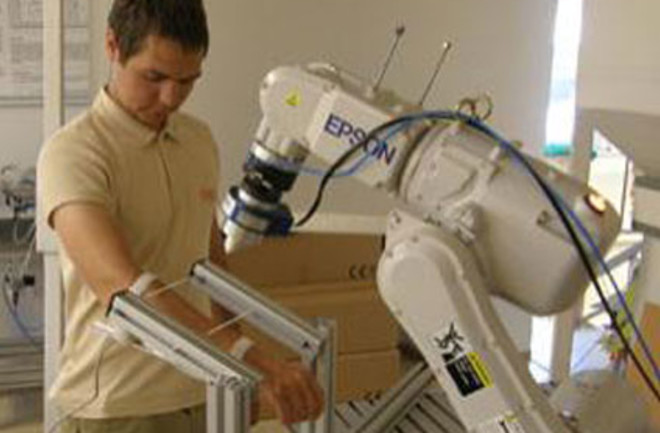 How much harm would a robot cause, if a robot could cause harm? Ok, admittedly that's not as good of a tongue twister as the woodchuck chucking wood, but it's a legitimate question being posed by researchers in Slovenia. In Slovenia, where electronic gadgets smack you. Borut Povše at the University of Ljubljana has been testing the punching ability of an industrial-strength robot, inflicting everything from mild to unbearable pain on six of his colleagues and measuring how much they said it hurt. Povše told New Scientist's Paul Marks that robots need to learn their limits to safely work side by side with humans:

"Even robots designed to Asimov's laws can collide with people. We are trying to make sure that when they do, the collision is not too powerful," Povše says. "We are taking the first steps to defining the limits of the speed and acceleration of robots, and the ideal size and shape of the tools they use, so they can safely interact with humans."

(if you happen to believe those rules

), the robots must first learn what hurts before they can be programmed to not bring harm to (or allow others to harm) their human overlords, researcher Sami Haddadin told New Scientist

"Determining the limits of pain during robot-human impacts this way will allow the design of robot motions that cannot exceed these limits," says Sami Haddadin of DLR, the German Aerospace Centre in Wessling, who also works on human-robot safety. Such work is crucial, he says, if robots are ever to work closely with people. Earlier this year, in a nerve-jangling demonstration, Haddadin put his own arm on the line to show how smart sensors could enable a knife-wielding kitchen robot to stop short of cutting him.

The punching robot apparently performed its tasks admirably, but there's no word on whether it enjoyed this job more

than its previous line of work: assembling coffee vending machines. Related content: Discoblog: Why a Punch Hurts More If Your Attacker Really Meant It

Cosmic Variance: Who to Treat Best – Your Robot or Your Wife?

DISCOVER: The Robot Invasion Is Coming—and That’s a Good Thing

DISCOVER: The Rise of the Machines Is Not Going as We Expected

DISCOVER: Want to Learn Biology? Have Someone Punch You in the Face.

Image: B. Povše, et. al, at the IEEE's Systems, Man and Cybernetics conference