Prosthetic Legs Aren't Better Than the Real Thing... Yet 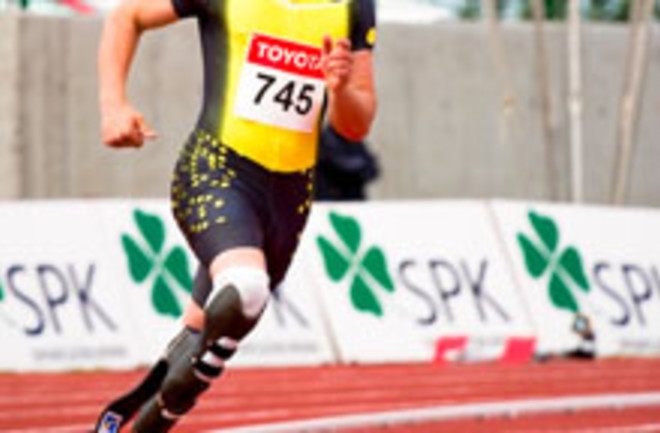 South African sprinter Oscar Pistorius raised a ruckus last summer when the he wanted to qualify for the Beijing Olympics, thanks to the J-shaped carbon fiber blades that the double-amputee uses to run. Pistorius didn't get to run in last summer's games, but now an MIT team has released a study declaring that he doesn't have an unfair advantage. Rather, the researchers found quite the opposite: Running blades for amputees, even made with today's best materials, can't compete with the legs that humans have evolved. Pistorius has long argued that he should be allowed to compete alongside able-bodied athletes in races, but athletics authorities banned him from doing so in last year's Olympic games, claiming that his blades gave him an unfair advantage over able-bodied athletes [The Guardian]. The MIT Media lab team led by Alena Grabowski helped to reverse his racing ban before turning its attention this year to the general question of whether blades or legs are better. The team concocted a clever solution to the problem of testing this question. The study participants were six elite sprinters who had one intact leg and one leg that had been amputated below the knee. Researchers decided to study these types of amputees because they could compare their affected leg to their unaffected leg [Los Angeles Times]. Biology won the day, according to the results published in Biology Letters. The ground force a runner can exert—that is, how hard his or her leg strikes the ground—determines top speed, the MIT scientists say. And the sprinting subjects' prosthetic legs supplied 9 percent less force on average than their biological legs. While biology gets the better of biomechatronics for now, the researchers note a caveat: Their study compares today's best prostheses to our biological legs, and prosthesis performance will probably improve in the future at a faster rate than the speed at which humans evolve better legs. Related Content: 80beats: Toddler Gets a Telescoping, Prosthetic Arm Bone That Grows With Him Science Not Fiction: Dr. Terminator: The Prosthetics Designer Who Makes Sci-Fi Sculptures DISCOVER: High Powered Prosthetics: a bionic muscle 100 times stronger than yours