Endless buzzes and dings can burden our minds and even influence important decision-making — but researchers are searching for solutions. 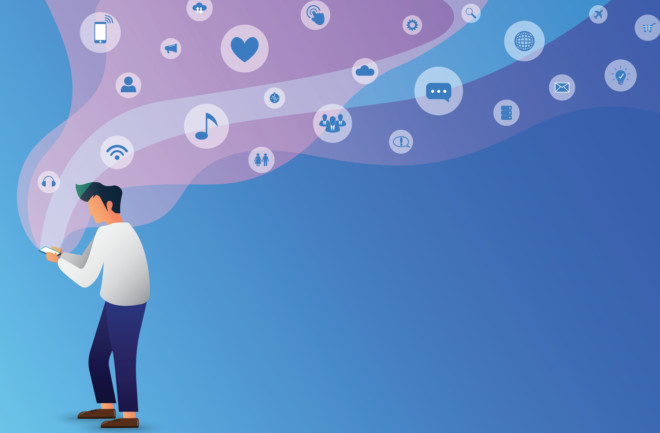 If you’ve ever felt flustered by your phone, you’re not alone. People receive between around 60 and 80 daily notifications on average, and some of us may get as many as 200. These seemingly endless dings and buzzes can take a major toll on our wellbeing. Research has linked them to depression and anxiety, and they may even trigger symptoms associated with attention deficit hyperactivity disorder, or ADHD.

A Load of Interruptions

These outcomes may stem from the fact that frequent phone interruptions increase our cognitive load, or the amount of information processed by the working memory. We only have so much mental capacity, and the extra effort it takes to switch between tasks can exhaust us, make us more susceptible to distractions and disrupt emotional regulation. Notifications can therefore result in slower (and poorer quality) work performance. Some researchers think that the goals of a given task can even “decay from memory” when we’re interrupted.

“Over time, in order to complete the same amount of work, you actually need a lot more self-control [and] cognitive resources to do that refocusing,” says Kostadin Kushlev, a behavioral scientist at Georgetown University. “The idea here is that you would get tired faster and then later on in the day you’d be even more prone to distraction because you’re just like, ‘Okay, I’m tired, I’m just gonna scroll. I give up.’”

In this state, we even experience a less accurate perception of time — specifically, we feel time is passing faster than in reality. We also become more present-oriented, which in theory sounds like a good thing (and heeds the advice of many a spiritual guru). Yet this skewed mindset steers people to overlook consequences and can encourage unhealthy behaviors like overeating and smoking, says Mosi Rosenboim, a behavioral economics researcher at Ben-Gurion University of the Negev in Israel.

In a recent Journal of Behavioral and Experimental Economics study, Rosenboim placed 188 undergraduate students into groups that received texts every minute, once every three minutes, or none at all as they completed a questionnaire. The responses from people who received more frequent messages indicated that they experienced higher levels of impulsivity, inattention and stress than the other groups. Meanwhile, the text-receivers generally responded more cautiously to hypothetical financial situations, such as the maximum price they’d be willing to pay for a lottery ticket based on their chance of winning.

Rosenboim’s findings, along with other work in this field, suggest that phone alerts can simultaneously cause more stress and hasty behavior (say, buying a pricey dress without thinking it through) as well as particularly risk-averse long-term decisions. When we’re bombarded by technology, most people “don’t want to make any decisions that involve risk and uncertainty because you don’t have the [cognitive] resources that you need to calculate the meaning of this risk,” he says.

But accepting potential hazards is necessary in making long-term investments, Rosenboim points out. So when you’re house hunting or just heading out for a shopping spree, it’s probably best to turn on “Do Not Disturb.”

Amid revelations that cell phone notifications can wreak havoc on our brains, scientists have sought out ways to counteract these effects. One possible solution: Scheduling notifications into batches that arrive at certain times of the day. For example, you could choose to keep things quiet except for at 7 a.m., noon and 5 p.m. to align with waking up, taking a lunch break and heading home from work.

Kushlev presented a solid case for notification batching in a 2019 Computers in Human Behavior study. In a randomized field experiment, researchers assigned 237 subjects from India into several groups, including those who received all their notifications three times a day, hourly, or none at all. The three-times-a-day group said they felt more productive, attentive, in a better mood and in greater control of their phones, while the notification-free subjects experienced more anxiety and fear of missing out, or FOMO.

The app developed for Kushlev’s study is now available to Android users as Daywise (some of his co-authors have financial ties to the app.) And as of this past fall, iPhone devotees can opt for up to 12 daily notification summaries. Kushlev takes advantage of this feature on his own phone, but he notes that the setup in his study automatically batched all notifications — the Apple equivalent lets users choose which apps to include. He admits he ended up excluding social media and texting notifications (which make up around 70 percent of all our alerts) to avoid missing important information, since his notification summaries completely hid these notifications. The FOMO is real.

Regardless of the steps we take to remedy smartphone-induced madness, Kushlev says that it’s up to social media companies to implement the structural changes that ease these disruptions. But to do so would contradict their MO: maximizing our attention to turn a profit. User experience research from tech powerhouses like Facebook doesn’t cover apps’ effects on our overall wellbeing, he adds.

But proof-of-concept research like Kushlev’s can serve as a model for these future changes. “What would happen if there was a function outside of those apps?” he says. “I don’t think we can ever rely on these companies to implement those features themselves.”

Meanwhile, some researchers have argued that more holistic user design is possible. Developers should pay attention to how people interact with their devices, argue the authors of a paper presented at a 2015 Association for Computing for Machinery conference. They concluded that alerts should be delivered at “opportune” times with the help of a machine learning model that trains on someone’s past behaviors. The model can learn the types of notifications that an individual prioritizes, such as messages from relatives.

This highly personalized approach could be beneficial, Kushlev notes, but it may come with caveats. While “trying to solve the problem of us being too distracted with notifications … we build the system to be based on that problematic behavior,” he says.

And of course, this would involve meticulous phone monitoring, which introduces yet another ethical quandary: In the struggle to free ourselves from tech mania, it isn’t clear whether more surveillance is the solution, or just adding more fuel to the fire.