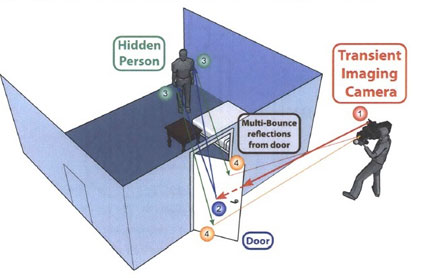 A new camera being developed at MIT has the ability to see around corners--without the use of periscopes or mirrors. The camera works by bouncing ultra-short bursts of laser light off a solid surface (like a floor or an open door). Most of the light is reflected back to the camera, but some scatters in every direction, a small portion of which then hits and bounces off the object to be visualized (and other parts of the scene). Some of that scattered light then bounces back off the door or floor, and finally make its way back to the camera.

"It's like having x-ray vision without the x-rays," said Professor Ramesh Raskar, head of the Camera Culture group at the MIT Media Lab and one of the team behind the system. "But we're going around the problem rather than going through it." [BBC News]

The team's computer program can analyze the scattered light and re-create a picture of what is lurking around the corner. The secret to the technology is to not overwhelm the camera's sensors with the initial reflection from the door. The camera's shutter has to wait until this initial pulse has passed before trying to collect the light bouncing around. The camera notes the arrival time and intensity of each photon of light to build a three dimensional picture of what it can't actually see. It takes several passes of the scene to build a full picture. 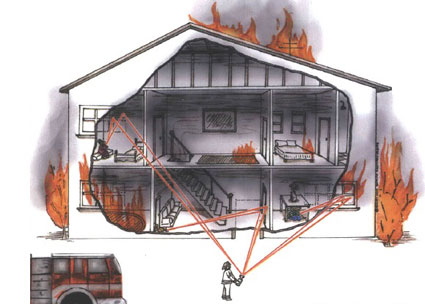 "In the same way that a CAT scan can reveal what is inside the body by taking multiple photographs using an x-ray source in different positions, we can recover what is beyond the line of sight by shining the laser at different points on a reflective surface," he said. [BBC News]

So far, the set up has been working in the lab, but hasn't been tested in real-world conditions, which would be exponentially more complex. The researchers say the technology isn't just for super-spies, it can also have more mundane applications.

For instance, it could be used for search and rescue missions to search for survivors in a collapsed building or a building on fire. It could also be used for avoiding car collisions at blind corners, for machine vision, and for inspecting industrial objects with hidden surfaces. It could have similar biomedical imaging applications by allowing doctors to use endoscopes to view areas inside the body that are normally hidden. The researchers noted that a portable imaging system in the form of an endoscope could be ready in the next two years. [PhysOrg.com]