On a Wing and a Photon: Solar Impulse Flies Across America

A solar-powered plane flies across the country to fire people up about renewable energy. 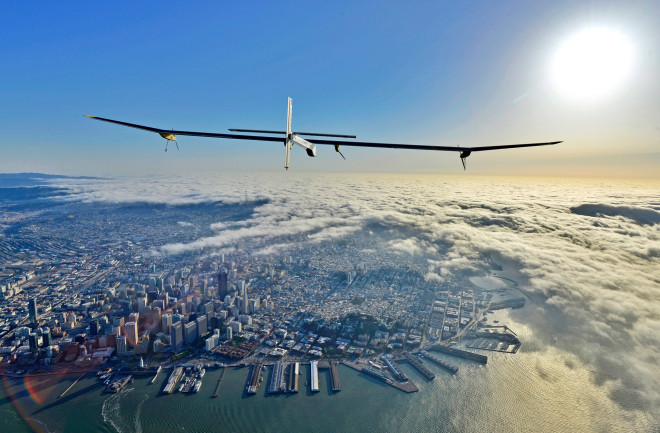 On May 3, Swiss psychiatrist and adventurer Bertrand Piccard settled into the one-man cockpit of a spindly plane with the wingspan of a 747. The propellers started, and he eased down the runway near San Francisco Bay. As the sun rose, he turned southeast toward Phoenix, 18 hours and 18 minutes away.

Piccard could have driven to Phoenix faster. But his plane, the Solar Impulse HB-SIA, is meant to go slow, averaging just 43 mph. The low speed saves energy, which it gets from the sun. Solar panels on the wings feed four electric motors, and batteries store enough energy to allow the plane to fly through the night, something no other solar plane can do.

Last spring and summer, beginning on that May morning, Piccard — known for his ballooning exploits, such as a 1999 trip around the world — and project co-founder André Borschberg traded piloting duties on a five-leg jaunt across the U.S. Their trip was part of an effort to get people excited about renewable-energy technologies.

During the last leg, between Washington, D.C., and New York, Borschberg felt a strange vibration. A helicopter reported that a piece of the fabric that formed the underside of the wing had come unglued and was flapping in the wind, and engineers feared the whole wing might disintegrate.

Borschberg says he was scared at first, but he calmed himself by thinking through the steps required to parachute to safety. “I told myself, it’s fine. You don’t bail out every day, so make sure to enjoy it.” Fortunately, it didn’t come to that. He stayed in the pilot’s seat and landed safely in New York on July 6.

HB-SIA is a prototype; Borschberg and Piccard intend to fly its larger successor, HB-SIB, around the world in 2015, powered by sunlight.

[This article originally appeared in print as "On a Wing and a Photon."]