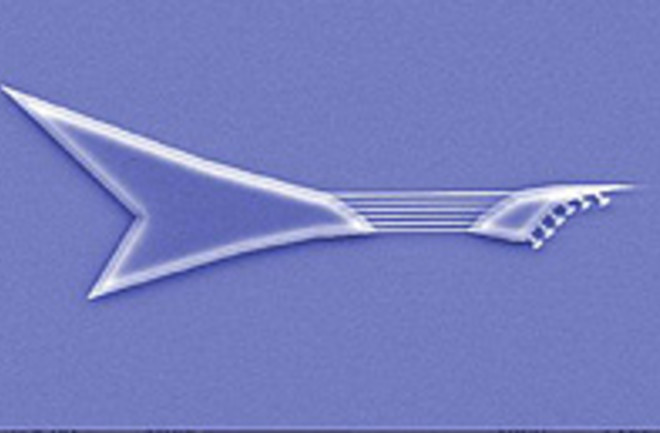 Physics graduate students at Cornell University have played the world’s highest musical notes by using laser beams to “pluck” the strings of a guitar the size of a red blood cell. This miniature performance demonstrates techniques that could be used to build microscopic machines and biological sensors. Drawing on the work of former Cornell physics graduate student Dustin Carr, who is now at Sandia National Laboratories, Keith Aubin and his colleagues used a beam of electrons to emboss a guitar shape—in this case, a glam-rock-inspired “Flying V”—onto a silicon crystal.

When stimulated by a laser, the guitar’s silicon strings resonate at frequencies corresponding to the notes (E-A-D-G-B-E) of a normal guitar but 100,000 times higher in pitch. A spectrum analyzer can pick up the vibrations, which a computer then modulates down to an audible level. The researchers are still a long way from mastering “Stairway to Heaven,” however. “We were able to vibrate multiple strings at once to play two notes,” Aubin says. “But that’s the closest that we could come to actually playing a song.”