Now That's Current Fashion: Power Your Phone With Clothes Made of Thermoelectric Fabric 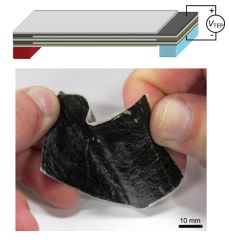 Each of us, just sitting in our chairs, is a little heat energy factory. So why not harness that body heat to power our phones and flashlights? Researchers have invented a thin, flexible "power felt"

that can be worn as clothes, converting heat into an electric current. Dead batteries are so out in the future. The thermoelectric fabric is made by stacking layers of plastic insulation with carbon nanotubes, one-atom-thick cylinders of carbon that are showing up everywhere from x-rays to fuel cells

. The current version only makes about 140 nanowatts of power, so it’ll need some improvement before it becomes practical. The researchers say the fabric's uses wouldn't be limited to clothing. From insulating hot water pipes to covering car seats, it can harness the usually wasted heat energy from and for any number of things. And this thermoelectric fabric is cheap---bismuth telluride, another other thermoelectric material, costs seven times as much. The researchers hope to create a $1 cell phone cover out of the fabric, which is also cheaper than other high-tech ways of harnessing energy. Capturing the energy of our bodies is not a new idea. There have been proposals to get energy from the movement of shoes

. Thermoelectric fabric makes it even easier: no need to bounce around, just sit back and let your metabolism charge your gadgets.