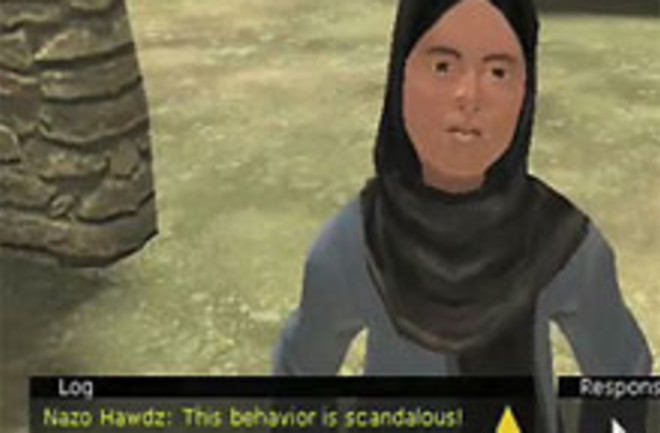 A new game may help soldiers in that problematic campaign--winning the hearts and minds of people in occupied countries. The game, developed by the University of Texas and backed by the U.S. Army, gives American soldiers deployed abroad some lessons in foreign customs and cultures. This is the opposite of a first-person shooter game; the Pentagon calls it a “first-person cultural trainer” game. Air-dropped into foreign lands, soldiers often find themselves at a loss, knowing neither the local language nor the cultural conventions. The new 3D simulation game is intended for soldiers to learn the niceties in Iraq and Afghanistan, where a friendly relations with locals could make the difference between life and death. Wired reports:

It’s a project that’s been in the works for three years, and uses cultural data provided by the military. The goal of the game is to enter a village, learn about the social structures and relevant issues, and then “work with the community” to successfully finish assigned missions.

The player's main goal is to avoid alienating or scandalizing the community, and to win people over instead. The player also has to rate the characters he meets on the missions on a scale of four emotions: anger, fear, gladness and neutrality. The game developers have worked to make the characters' reactions realistic, but the game's critics still worry that soldiers who learn virtually will fail to understand real cultural cues, which are often more complex and nuanced. The Pentagon has lately made a serious push into what some call "militainment." The U.S. military, which spends about $6 billion each year on developing games, had a surprise hit when it created the game "America's Army" to help in its recruitment process. The game, which can be downloaded for free, tracks U.S. soldiers as they duck and weave through dangerous enemy territory. Players fire AK-47's and kill the bad guys, but unlike real life, anyone who gets shot in the game can start over. And as Peter Singer points out in a report for the Brookings Institution, 70,000 young Americans signed up for the army last year, but almost 4.7 million people spent Veterans Day playing war at home.