NASA Gets a Hand-Me-Down from Spy Agency: Two Space Telescopes 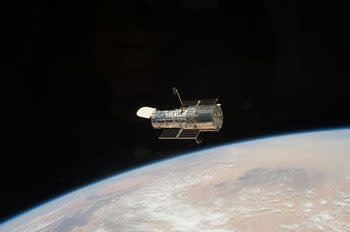 The Hubble Space Telescope. The new scopes are shorter, designed for peering down.

: apparently, the National Reconnaissance Office, the agency that looks after the US's spy satellites, had a couple of Hubble-scale space telescopes lying around. In a warehouse in upstate New York. In bits and pieces, lacking the requisite solar panels and cameras to make them fully functional, but basically complete, all dressed up with nowhere to go. Why did the NRO have two unused space telescopes, when NASA is barely able to scrape two pennies together? Neither side will answer that question, citing classified information. Go ahead, use your imagination. But an enterprising NRO official gave NASA a ring, and a little bureaucratic paper-pushing later, hey presto! NASA has two more space telescopes it had a few months ago. Right now, Chandra, Spitzer, and Hubble are in orbit, and the James Webb Space Telescope is supposed to launch in 2018, though its budget woes have been of epic proportions. These new telescopes are essentially satellites with mirrors the same width as Hubble's but a shorter focal length, so they can see a wider stretch of space, and they are likely to be repurposed as part of a mission to explore dark energy, as Julianne Dalcanton notes over at Cosmic Variance

. It's a little wince-inducing, though, to realize that NASA will be lucky if they can scrimp and save enough to get even one of these scopes up into orbit. “We don’t anticipate ever being rich enough to use both of them, but it sure would be fun to think about,” said Paul Hertz, NASA’s astrophysics division director, in a conference call on Monday (via Talking Points Memo's IdeaLab

). Fun is one word for it; sad is another. But those reservations aside, we wish NASA best of luck and congratulations on this windfall---it's always exciting to see more resources being funneled towards observing space.