Mind-Controlled Video Game Gets a Tryout in Japan 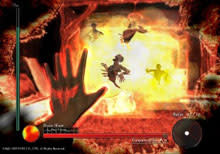 At the Tokyo Game Show today, a video game player strapped on a headset and, without touching a conventional video game controller, began to kill zombies--using only the power of his mind.

Called "Judecca," the PC game is a zombie-killing first-person-shooter, though it's really just a proof of concept and not something that's going to be available to consumers anytime soon [Fox News].

The game was produced by leading Japanese studio Square Enix and makes use of a brainwave-sensing headset from NeuroSky, a San Jose-based company that develops biometric sensors and similar products aimed at the consumer market [PC World].

NeuroSky's "Mindset" device looks like a big pair of headphones with a single electrode that wraps around to tap the wearer's forehead; the company says the device uses electroencephalography (EEG) to measure the current state of relaxation or concentration of players. The game made its debut at the Game Show today, and the first reports are coming in from bloggers who tried the system and figured out how to use the headset to wreak havoc on the zombie world.

After holding up your hand, you then concentrate on a glyph that glows in direct relation to your ability to concentrate, opening up what’s called your Devil’s Eye. Once you’re in a zen-like state, you can see Judecca’s zombies and unleash some kill. You can also show your concentration skills enough to walk through walls, naturally [Tech News Time].

Entertainment that makes use of recent developments in machine-brain connections seems sure to emerge in the coming decade. Square Enix hasn't announced whether it will push forward to produce a commercial game with the technology, but NeuroSky has said that its Mindset is a simple, plug-and-play device that could be used in many different gaming systems. NeuroSky also recently had a competition for game concepts that would use the Mindset and would run on the Nintendo system. Related Content: 80beats: Bionic Monkeys!Image: Business Wire