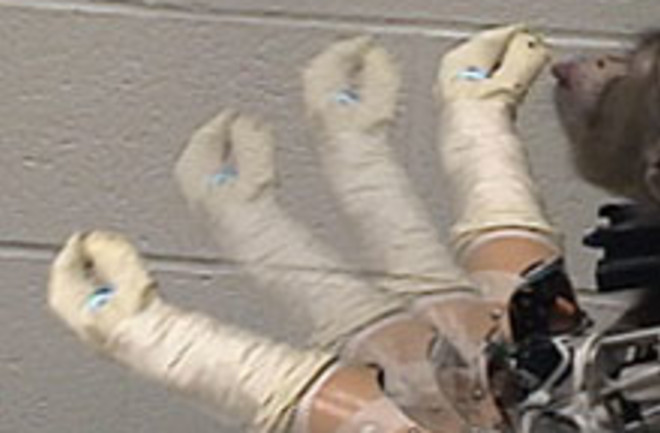 This can only lead to a summer blockbuster. Researchers implanted tiny electrodes in two monkeys' brains, allowing them to move robotic arms with their thoughts. To motivate the monkeys to perform, they were encouraged to feed themselves marshmallows and pieces of fruit with the robotic arms, which had joints and "grippers" that roughly replicated fingers. According to the research team's report in Nature [subscription required], the arms' movements were fluid and natural, and the monkeys continuously adjusted the speed and direction of their robotic limbs. While the technology isn't yet ready for human testing, scientists are hopeful that it can eventually be applied to prosthetic limbs for people with spinal cord injuries, strokes, and other paralyzing conditions. For the bionic monkey experiment, researchers implanted hair-thin electrodes in each monkey’s brain. The arm is controlled by a network of tiny electrodes called a brain–machine interface, implanted into the motor cortex of the monkeys' brains — the region that controls movement. It picks up the signals of brain cells as they generate commands to move, and converts those into directional signals for the robotic arm.

The researchers, led by Andrew Schwartz of the University of Pittsburgh, Pennsylvania, first trained two monkeys to use a joystick to manipulate the arm. Then, the monkeys' own arms were restrained by placing them in tubes, and the robotic arm was switched over to brain control [Nature News].

Researchers also developed their own software to translate the brain signals into commands for the robotic arm.

The primary motor cortex, a part of the brain that controls movement, has thousands of nerve cells, called neurons, which fire together as they contribute to the generation of movement. Because of the massive number of neurons that fire at the same time to control even the simplest of actions, it would be impossible to create probes that capture the firing pattern of each. Pitt researchers developed a special algorithm that uses limited information from about 100 neurons to fill in the missing signals [Science Daily].

A previous experiment by the same research team demonstrated that monkeys could control a cursor on a computer screen using an electrode system. But lead researcher Schwartz says this experiment is a major step forward, because the monkeys ultimately viewed the arms as extensions of their own bodies.

Indeed, the biotech company Cyberkinetics Neurotechnology is currently testing its Braingate system, which uses a similar brain-machine interface to let people control artificial limbs, wheelchairs, and household devices with their minds. The brave and the would-be-bionic should note that Cyberkinetics is looking for volunteers for its clinical trials. Image: Andrew Schwartz/University of Pittsburgh

So when can this fabulous machine-brain technology be applied to humans? Pretty much now, Schwartz believes.

"In the next couple of years I'm quite sure there'll be humans walking around with these kind of implants," Schwartz added. "I don't think it's very far away at all. In fact, other teams have already implanted a few people with versions of these kind of devices --although they haven't yet matched the kind of performance we achieved with our work" [Forbes].