The free-floating robot could make work more efficient on the International Space Station. 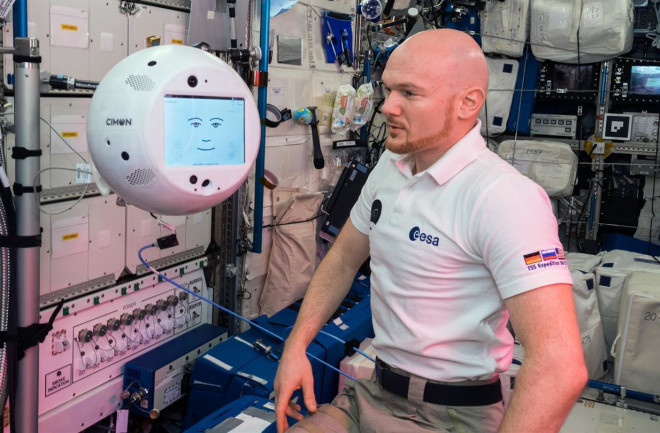 Supercomputers with artificial intelligence don't have a gleaming reputation as intergalactic travel pals — you know, HAL 9000 and that old yarn. But that didn’t stop space agencies from making a robot astronaut assistant anyway.

In 2018, a $6 million basketball-sized, floating computer named CIMON (Crew Interactive MObile companioN) gained fame for its interactions with Alexander Gerst, a German astronaut and geophysicist with the European Space Agency. Now, a new and improved version of the robot — CIMON-2 — launched into orbit on Thursday, where it will soon join the International Space Station crew and aid astronauts.

Deep-space travel will force human crew members to endure significant stress loads, and researchers with the DLR Space Administration, Germany's space agency, wanted to see if CIMON could solve a Rubik’s cube, help with a few experiments and even boost crew morale. Unfortunately, CIMON’s first trip proved there are still some bugs to work out.

In an early demonstration in 2018, it was CIMON — not Gerst — that needed a morale boost. After Gerst asked CIMON to play his favorite song, the 11-pound bot refused to let the music cease, defying Gerst’s commands. And, rather than acknowledging it had jumped rank, CIMON accused Gerst of being mean and finished with a guilt-trip flourish by asking Gerst, “Don’t you like it here with me?” It wasn’t quite HAL 9000 bizarre, but bizarre nonetheless.

You be the judge:

CIMON, a joint collaboration between Airbus and IBM Watson, is loaded with speech and visual recognition capabilities. And, through its connection to IBM’s Earth-based cloud servers, CIMON can be trained and develop new skills and reasoning capabilities. A team of some 50 people have been working to make the bots possible since 2016.

Early glitches aside, robots like CIMON are poised to play feature roles in future missions to the moon, Mars and beyond. And CIMON-2 is picking up where its predecessor left off. The new version comes with improved orientation and is more "empathic," officials say.

"It is planned that CIMON-2 will stay on the ISS for up to three years and support the crew,” says Till Eisenberg, Airbus' project manager for CIMON. “CIMON-2 has more sensitive microphones and a more advanced sense of orientation. The AI capabilities and stability of the complex software applications have also been substantially improved.”

Over the coming years, CIMON-2 could make work a bit more efficient on the space station, helping pass on instructions for repairs, documenting experiments and offering voice-controlled access to reference material.

CIMON-2 isn't the only bot hoping to have a long future in space. Scientists at NASA’s Langley Research Center are experimenting with flexible, silicone-based robots for “dangerous, dirty, or dull,” jobs in space, such as forming a rudimentary shelter to protect astronauts during a martian dust storm. NASA’s LEMUR robots, for example, could someday serve as lunar pack mules.

Of course, it’s easy to forget robots have done the bulk of space exploration up to this point — they even send selfies from Mars! So, when that first person steps onto the Red Planet’s surface, there’s a good chance they’ll be sharing the limelight with a robot companion.