The farm robot is part of Iron Ox’s aim to build hyper-efficient farms in the urban centers where most food is consumed. 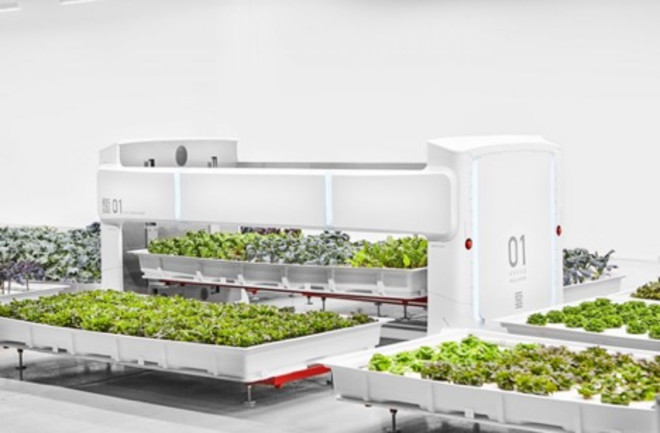 For centuries, farmers cajoled Earth’s bounty with oxen and plow. But eventually, grass-fed power gave way to steel workhorses fueled by steam and diesel — and a new era of agricultural efficiency followed. Now, rays of light from a new agricultural dawn are splintering the bucolic horizon: autonomous indoor farms tended by fleets of robots connected to hyper-efficient agro-hiveminds.

For a glimpse at this new twist on the farm workhorse, look no further than Iron Ox’s robotic farmhand nicknamed Angus. Angus’ job on the “farm” — a warehouse in Silicon Valley, technically — is to transport 1,000-pound trays of leafy greens growing in a perfectly-balanced hydroponic bath. Angus rolls through the Iron Ox warehouse hoisting trays into position for robotic-arms that can plant crops, add nutrients, transplant crops as they grow, harvest and ultimately package their bounty.

But Angus isn’t really “Angus” the individual. Rather, Angus is just one appendage of an entire robotic-software-sensor system controlled by “The Brain.” It’s a central computer that monitors the entire operation, from Angus’ next move to the nitrogen levels in tray 2. It’s all part of Iron Ox’s aim to build hyper-efficient farms in the urban centers where most food is consumed.

By locating autonomous farms closer to consumption, you already cut down on the fuel and labor costs needed to get plants from point A to B. But Iron Ox isn’t doing too bad on the productivity side, either. Their farm, on a foot-to-foot comparison, is about five times as productive as a traditional farm.

That’s because Iron Ox monitors every single facet of the growing cycle. Plants are given just the right amount of space, sun (the warehouse allows natural light in) and nutrients to grow. Because computers can run 24/7, the plants are constantly monitored and conditions adjusted to optimize growth. With the aid of machine learning algorithms, every additional crop improves the ability of “The Brain” to grow the next crop. Of course, it also helps that Angus doesn’t need to eat, sleep or collect a wage for his labor.

Iron Ox isn’t the only enterprise taking autonomous, robotic farming to the city. There are now dozens of startups putting their vision of urban farming to the test, and indoor farming is expected to be a $40 billion industry within a decade. Some are vertical farms that bathe walls of plants in LED lights. Aquaponic farms raise fish and veggies in a circular system: the fish poop and feed the plants, and the plants filter the water for the fish. But even old-school farms are getting a hand from robotic labor.

Already, precision-ag giants like John Deere are testing autonomous planters, sprayers and harvesters that chart daily routes and interventions based on data gathered by self-directed drones flying over fields and other real-time sensors. Indeed, though tractors still rule the farm, their days of dominance may be numbered.