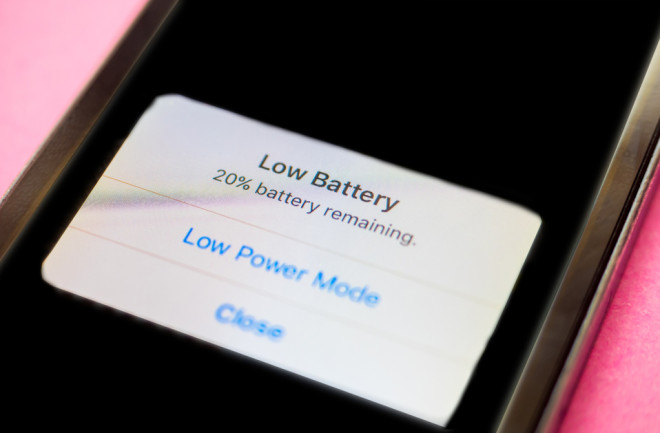 It’s happened to all of us. You’re out and about when you notice that your phone is running low on battery. For many, the realization is an annoyance, but for some people, it's a problem with deeper implications. Edging that battery icon back up becomes a goal of singular urgency, a task that lends a frisson of unease to our everyday lives.

At least, that’s what two researchers in Europe found when they surveyed a small group of London commuters about their phone habits. They found a common thread: the battery icon on their phone screen exerted an undue influence over their activities. When juice dipped low, the study respondents described a sense of anxiety and began coordinating their plans to either find a charging station or get home before the dreaded black screen arrived.

It’s an insight that’s not entirely unexpected, but, says Thomas Robinson, a lecturer in marketing at the U.K.’s Cass Business School and study co-author, the specific ways people structure their daily activities around their phone charge offers insights into modern life — and how we can improve it.

“The battery is a kind of a clock, it’s a countdown to the future,” he says. “The battery forces you to interpret and think about time and space.”

Their study appeared in August in the journal Marketing Theory.

Living by the Battery

Robinson and his co-author, Eric Arnould of Finland’s Aalto University, surveyed 22 commuters on the London subway about their phones’ battery lives and how it made them feel. In short: it mattered a good deal.

“It panics me when I get the alert saying, ‘the battery is low, do you want to put battery save on?’ and I think it is at 20 percent that you get that. I’ll immediately put it on to battery save and then get it plugged in,” said one participant.

“Full would be ‘Yeah, ok great, good to go for the day’; 50 percent I’d be a bit: ‘Oh God, I had better stop it from updating itself all the time in the background … Then it would be at thirty percent and I would be like: ‘Now I’m not having fun anymore,'” another reports.

Not everyone was quite so attentive, or impacted by, their phones’ charge levels, but it does hint that our mobile devices are changing the way we think about our environment, Robinson says.

This isn’t necessarily an explicit calculation, of course, but it does factor into our decisions regarding how we’ll go about our day, the researchers argue. One respondent, for example, described taking the subway in the exact opposite direction of her destination just to charge her phone at a mall. Another says he’ll plug his phone into a charger when visiting his father even before he says hello.

A sign of modern frivolity? Perhaps. But there are real consequences to having a dead phone, Robinson points out. Say you were supposed to meet a friend later and they want to change plans. Or perhaps you get lost on your way there, and can’t rely on Google Maps to guide you.

Keeping your phone charged has begun to become a kind of social obligation, the researchers argue. To be a participatory member of society, we often need access to the communication, transportation, financial apps and more that our phones contain. No wonder we begin to worry when they near temporary death.

There are reasons to be cautious when interpreting the researchers’ findings. Their sample group was small, and consisted of middle-class white-collar London urbanites. That was intentional, Robinson says — they wanted to get qualitative data on this subset of humanity in order to better understand how large city dwellers interacted with their phones. Data from a small town, or even a place where people live and commute differently would likely be different.

But their research does highlight some important considerations for the people making our future living spaces and technologies. Considering how charging points are located around a city might factor into urban planning in the future, Robinson says. App makers could think about adding automated low battery alerts to forestall the obligatory “sorry, phone’s about to die!” text when we’re running low.

And for the rest of us, perhaps it’s a hint at a low-effort mental health hack.

“‘When it is full you are thinking: ‘I can go as far as I want, I can go as fast as I want. I don’t need to worry about it,'” one participant opined.

If a low phone battery makes us feel anxious, perhaps we can charge our way to happiness, too.