"Levitating" Transporter Pods: The Cars of the Future? 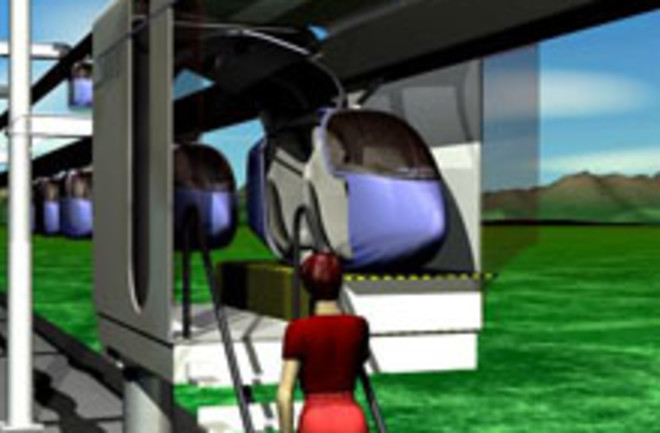 Meet SkyTran, a proposed rapid transportation system that uses computer-controlled vehicles that use magnets to "levitate" from their rails. A passenger would enter a pod, type in where he or she wants to go, and the computer system would do the navigating (and driving). The pods would carry up to three people and travel up to 150 mph. The system would be computerized to deploy the pods to crowded areas, and smart enough to re-route to avoid traffic jams. Discovery Channel reports:

The pods are designed to hang beneath an elevated guideway. They are propelled by the interaction of electromagnetic fields. Unimodal expects the pods to eventually be capable of traveling at speeds of up to 150 mph.

The California based company that came up with the design, Unimodal Systems, wants to make SkyTran a reality. According to their Web site:

The internet allows more throughput and better connectivity than the circuit switching method of the classic telephone network. SkyTran does the exact same thing for transportation - individually switched SkyTran vehicles rather than single-destination trains.

First, the company would like to build the systems in crowded areas like airports or downtown. The next step would be to hook the pods up with public transportation systems like San Fran’s BART. And ultimately, the company plans to break into the consumer market and reduce our reliance on cars. Anyone curious about how the system would look can check it out when it goes on display in NASA Research Park at Ames (sometime in the near future). Related Content: Discoblog: First Green Car DISCOVER: Future Car Ideas