Back to The Future: The First Green Flying Car Is Ready For Takeoff 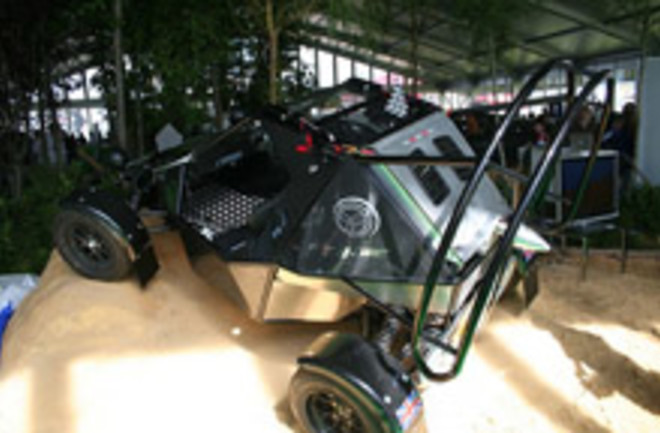 Ever since Henry Ford’s “sky flivver” killed a pilot in 1928, engineers have devoted time and money to building the ultimate flying car. On Wednesday, British adventurer Neil Laughton was hoping to fly the “world’s first bio-fuelled flying car” over the English Channel, and embark on a 42-day trip to from London to Timbuktu in Mali. The flying car is powered by a snowmobile engine, and fueled with a mix of petrol and bioethanol. Unfortunately for Laughton, he failed to submit the proper paperwork to fly across the English Channel, so his trip began a bit less dramatically: He took the ferry from the U.K. on Wednesday morning, and is now preparing to take off in France. DISCOVER caught up with Laughton, who says he will take flight on Saturday. He would not tell us the location of his runway, however, because he doesn’t want the French authorities to stop the voyage. So why use biofuel? “We wanted to make a statement to the world that even a James Bond flying car can save the environment,” says Laughton. If/when he does start his journey, he'll need good weather to complete the 3,600 mile trip through the Pyrenees, the Straits of Gibraltar, and the Sahara Desert. The Parajet SkyCar will travel by both land and air, at speeds of up to 110 mph on the ground and up to 70 mph in flight. It takes just three minutes for the car to take off from a field or airstrip that is at least 700 feet long. While in the air, the car is controlled by cables and pedals, and can fly as high as 15,000 feet. Curious about what it looks like? Then click here to see for yourself. Related Content: DISCOVER: Dude, Where’s My Jetpack DISCOVER: Future Cars