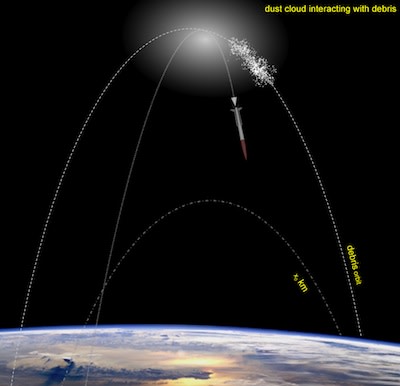 Here on earth, green enthusiasts tend to judge people for littering, but for 50 years, we’ve had little opposition

to cluttering up space. Today, there are hundreds of millions of objects in low-earth orbit, ranging from defunct satellites to trashed lens caps and frozen urine. More than just an aesthetic problem, space junk can crash into satellites and endanger ships passing through on their way to deeper space. Several plans have been proposed

to clean up the mess, some requiring advanced materials like aerogels, but the latest suggestion is a bit more cost effective: It just requires a bit of dust. The Naval Research Laboratory wants to deliver clouds of dust particles via rocket to specific altitudes, where they would travel the same path as targeted pieces of space junk, but move in the opposite direction. When the target reached the cloud, the moving dust would coat it, increase its drag, slow it down, and lower its orbit, pulling it towards a fiery destruction in earth’s atmosphere. It's an interesting idea but raises one obvious concern: If the delivery went poorly and left the dust in the wrong place, or moving in the wrong direction, the attempted solution would merely add more debris to the trash already in orbit. Nonetheless, the researchers point out that small meteorites and human activity already release widely dispersed dust into low-earth orbit every day. Although the scientists would be adding concentrated dust clouds, the total volume from the cleanup effort would still be much less than that already left behind, they say. [via Talking Points Memo Idea Lab