LEDs Light Times Square, But Can They Light Your Office?

A bigger, better diode could bring LED lighting to the mainstream.

The invention of the bright-white light-emitting diode (LED) in the 1990s marked the beginning of a revolution in lighting. Cheap, long-lasting, and needing little power, bright LEDs are increasingly the light source of choice for flashlights, traffic signs, even the brilliant marquees in places like New York City’s Times Square. They are also used to illuminate the picture in some large-screen TVs. But LEDs still have not made much headway in our homes and offices, where the general lighting provided by incandescents and fluorescents is still superior.

Part of the reason is that individual LEDs are typically quite small; the surface area of the semiconductor material that emits light is only about one square millimeter. As a consequence, a bright LED, of the kind found in a flashlight, might produce 80 lumens (a lumen is a standard measure of how powerful a light source appears). A 100-watt incandescent bulb, in contrast, typically emits about 1,500 lumens. To approach this level of brightness, lighting manufacturers have arranged LEDs in arrays, which is a bulky solution at best. Some have made individual small LEDs as bright as 1,000 lumens, but these are expensive and still function best as spotlights, not as area lighting for a room.

Now Luminus Devices hopes to break into the general lighting realm with its LED PhlatLight. Derived from research the firm’s founders did at MIT, the PhlatLight is a much bigger LED, with a light-emitting area of 12 square milli­meters. A single such LED can generate up to 3,300 lumens. PhlatLights have already been used to backlight large LCD screens, replacing the necessary thousands of LEDs with a few dozen.

For room lighting, a PhlatLight would be placed at the end of a plastic tube similar to those used for fluorescent fixtures. Light from the LED would spread out along the tube, illuminating a wide area. Luminus Devices hopes to have affordable versions of such lighting on the market within a few years. 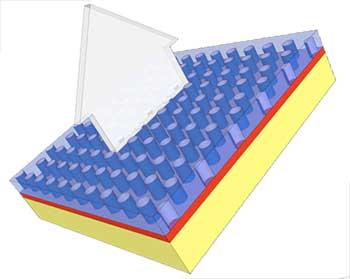 If you want more light, making the light-emitting portion of an LED bigger seems like a no-brainer. But just as something painted black is very good at both emitting and absorbing heat, a semiconductor that is very good at emitting photons is also very good at absorbing them. In a traditional LED, the bigger you make the light-emitting region (the red layer in the diagram), the harder it is to get the photons out before they are reabsorbed. Luminus Devices has overcome this problem by creating a so-called photonic lattice in the top layer of the LED (blue). This lattice looks like an arrangement of tiny holes, each one smaller than the wavelength of light being emitted by the LED. Metaphorically speaking, the lattice acts as a magnet for photons, extracting them (white arrow) from the light-emitting region before they can be reabsorbed.