Lasers Could Generate Shields Out Of Thin Air 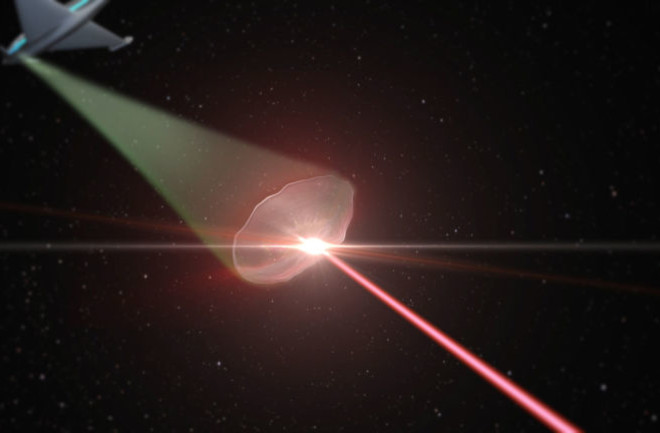 A plane-based laser system generates an atmospheric shield to protect itself against a laser attack in this illustration. (Credit: BAE Systems) Lasers could turn Earth's atmosphere into a defensive, or offensive, tool in the future of warfare. Proposed by BAE Systems, a defense and aerospace company founded in the United Kingdom, the conceptual Laser Developed Atmospheric Lens (LDAL) would use lasers to ionize and heat the atmosphere in a way that temporarily endows small pockets of it with useful characteristics. This could take the form of an aerial lens used to magnify objects far away, or even a kind of refractive shield to scatter incoming enemy laser beams.

Lenses In the Sky

The concept is essentially the same as using a conventional lens made of glass or plastic. By altering the shape of the lens, light can be focused to a point, or scattered outward and diffused. The LDAL is a theoretical next step, and uses lasers to create artificial lenses out of gases in the atmosphere. A laser beam mounted on an airplane would fire regular bursts of energy, creating a lens somewhere in front of or behind the plane that effectively moves along with it. The laser could modulate the properties of the lens to allow for different applications, as in the video, where the plane shifts from monitoring to defense mode. https://www.youtube.com/watch?v=rhWBAFAGwzE With science breakthroughs, the go-to timeframe for real-world implementation always seems to be the 5- to 10-year range. But BAE Systems says that it foresees the technology reaching fruition in about 50 years — even nuclear fusion is famously prophesied to be only 30 years away. In other words, Generation Z might — we emphasize might — see this technology in the skies. Regardless of the implementation timeline, the science behind the idea appears sound. Atmospheric refraction is what causes desert mirages to appear, as hot air near the surface bends the sun's rays to make it appear like the sky is shimmering on the ground. It's also responsible for the "skywave" phenomenon whereby radio signals can travel for thousands of miles by bouncing off of the ionosphere. Still to come, presumably, are tests meant to refine our ability to precisely control the properties of aerial lenses, especially given that a plane will inevitably encounter a range of conditions as it flies. Still, the concept could be applied to ground-based systems as well, such as the laser banks meant to propel the Breakthrough Starshot mission to Alpha Centauri. The endeavor, proposed in 2016 by Russian billionaire Yuri Milner would use Earth-based lasers to propel tiny spacecraft to around 20 percent the speed of light. Even placed on a mountaintop somewhere, there's still a thick blanket of atmosphere between us and outer space, so any laser hoping to reach to the stars would face the risk of dispersal and refraction. If we could use atmospheric lenses to help focus and guide the laser, however, we could accomplish the goal with more accuracy and less power.