Breakthrough to the Stars 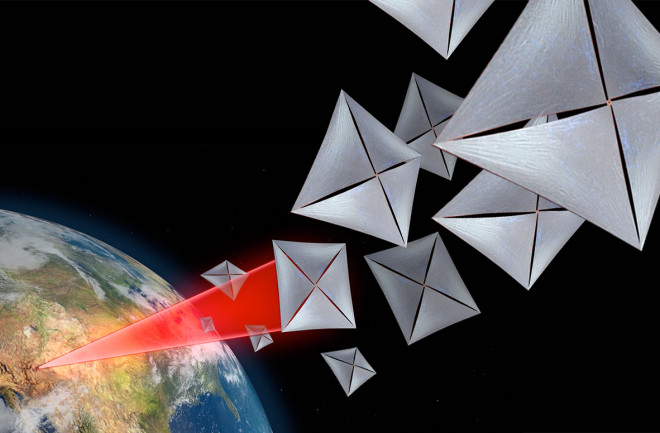 An illustration of the probes being propelled by an Earth-bound laser. | Breakthrough Initiatives

Sign up for our email newsletter for the latest science news
Alpha Centauri, the star system Breakthrough Starshot is aiming for. | ESO/L. Calçada/Nick Risinger (skysurvey.org)

2016 may be remembered as the year when the stars suddenly got a whole lot closer. On April 12, Russian-born entrepreneur Yuri Milner unveiled a bold program, Breakthrough Starshot. Its mission: to send a squadron of robotic space probes to the nearest star system, Alpha Centauri, more than 25 trillion miles away. The probes would launch within 20 years and take another 20 years to reach their destination. The subsequent discovery of a roughly Earth-sized planet orbiting one of Centauri’s stars has given the mission an extra sense of purpose.

“Today is the day that space explorers have dreamed about,” said Starshot Executive Director Pete Worden, the former head of the NASA Ames Research Center. “The stars are finally within our reach.”

An illustration of the probes being propelled by an Earth-bound laser. | Breakthrough Initiatives

The spacecraft for this venture would be tiny, wafer-thin devices loaded with microelectronics and weighing just a gram; they’d be affixed to sturdy, ultrathin sails of comparable mass. Conventional rockets would carry the miniature probes into Earth orbit, and a synchronized array of ground-based lasers would then focus its beams on individual sails, imparting enough force to accelerate each probe to 20 percent of the speed of light.

While the plan requires technology we still don’t have, Milner is personally donating $100 million to support the necessary research and development. Space buffs are thrilled, though Jonathan McDowell of the Harvard-Smithsonian Center for Astrophysics is more cautious. “Starshot may not get us to the stars,” he says, “but it should, at a minimum, help us develop technologies that will be useful in future space exploration.”