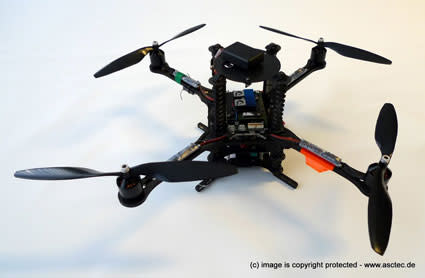 This little laser-powered quadracopter broke a world record on October 28th by flying for over 12 hours with the help of lasers from the ground. The previous record for laser-powered flight was 6 hours. The laser beam that powered the 'copter's batteries has the strength of 250,000 laser pointers. The technology was developed by LaserMotive, a company developing beaming technologies to make power wireless (and obviously awesome). The system of mirrors and lenses on the ground beamed the laser up to the craft 30 feet overhead, where the laser beam charged photovoltaic cells on the underside of the craft. The laser supplied the unmanned aerial vehicle (UAV) with 2.5 kilowatts of power, which the team explained to MSNBC's Cosmic Log isn't all that much:

Jordin Kare, another one of LaserMotive's co-founders and a pioneer in the field of laser propulsion, said the laser generated enough radiation to heat up your hand if you stuck it in the beam, but nowhere near enough to blast a hole in it. "We've actually cooked hot dogs with that laser, and it takes about four or five minutes," Kare told me. "Not exactly a death ray."

Hit the jump for video of the laser 'copter in action. The researchers also developed an autonomous control unit for the UAV, so it essentially flew without human interaction, the company explained in their press release

Theoretically the flight could have continued indefinitely. "It was a scientifically exciting, yet a little boring experience to be safety pilot over night" Michael Achtelik, CEO of Ascending Technologies GmbH said.

The company has big hopes for lasers as a power source for future UAVs. Previously the company won $900,000 in the NASA-backed Beam Power Challenge

, with a laser-powered tether climber. The researchers hope to procure funding to adapt their system for military uses, and are also looking for opportunities in orbit and beyond, they told Cosmic Log

"I've actually done a design for powering a lunar base from Earth," Kare said. He's also fleshing out a concept he came up with in 1991 to launch single-stage vehicles into orbit using heat exchanger thrusters that are powered by intense laser light. Ultimately, LaserMotive wants to take beam systems where no lasers have gone before. "We're going for solar system domination," [company president Tom] Nugent joked.

Science Not Fiction: Wireless Power, or, How to Keep Your Light Saber Charged and Ready

80beats: Laser-Powered Robot Climbs to Victory in the Space-Elevator Contest