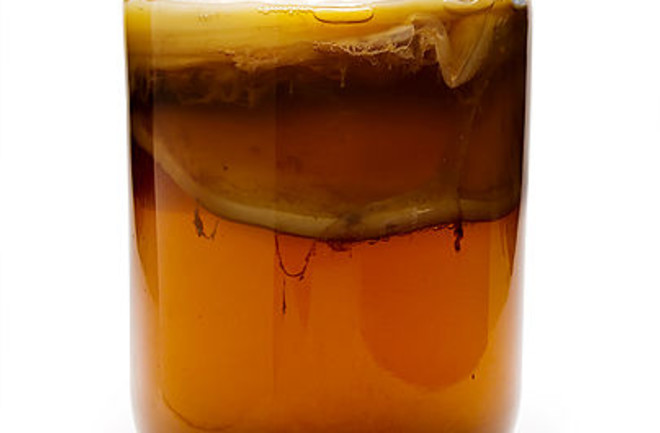 Photo credit: Mgarten (Wikimedia Commons) At first glance, making kombucha sounds straightforward. After all, kombucha is fermented tea, which tells all you need to know about making it: take some tea and ferment it. Unfortunately, brewing kombucha is not that simple, as evidenced by the plethora of information and recipes found on the Internet. For those who have ever contemplated or even decided to begin brewing kombucha for the first time, don’t let the wealth of kombucha information intimidate you. Here, we break down the process of kombucha brewing and experimentation, supplying you with the scientific rationale for each step. Understanding the science of each stage may allow for a more successful and experimental brewing without having to rely on a recipe. 1. Making the tea base. The tea base is nothing more than sweetened tea, so it is easy enough to make. However, the amount of tea and sugar used will affect the flavor of the resulting kombucha. The exact proportion of water to tea to sugar can be modified to suit personal tastes. For the varieties of teas and sugars suitable for making kombucha, check out our previous post on the ingredients that go into making kombucha. In general, for every 1 cup of boiled water, steep 1 tea bag or 1 ounce of loose leaf tea; this should be left to steep for 3 – 5 minutes, with deviations depending on the type of tea and desired tea strength. Certain teas, such as green and white teas, have subtle flavor profiles that may result in a bland-tasting kombucha. To obtain a more concentrated flavor with delicate teas, use more tea bags, do multiple infusions, or combine the green or white teas with a more robust black tea. If you use tea bags, adding more of them can help increase the amount of flavor compounds in the brewed tea, creating a more concentrated green or white tea flavor. Avoid steeping the teas for too long; steeping teas longer than the recommended time results in the extraction of more bitter compounds. This over-extraction will create a more bitter tea base. The same caution equally applies to loose leaf teas. If you use loose leaf teas, multiple infusions will help concentrate the flavor without the risk of over-extraction. A proper method for multiple infusion involves steeping a large amount of tea leaves for 20 – 45 seconds in just enough hot water to cover the leaves. The brewed tea is removed, and another small amount of hot water is added to the leaves and steeped for another short amount of time. This can be repeated 3 – 15 times, depending on the type of tea. This method uses twice the amount of tea leaves with half the amount of hot water [1], essentially concentrating the flavor compounds that diffuse out of the tea leaves. Multiple infusions may not be as effective with tea bags; the tea fannings used for tea bags have small surface areas, and so most, if not all, of the flavor compounds will have quickly diffused into the water in the first steeping. Sugar can be added to the boiling water before or after steeping the tea, as long as the sugar source completely dissolves. Typically, 1 cup of sugar is added for every 4 cups of boiled water. 2. First fermentation. Once the tea is finished steeping and the sugar is dissolved, remove the tea bags or strain out the leaves – this is the completed tea base. Tossing the SCOBY (Symbiotic Culture of Bacteria and Yeast) into this freshly-completed tea base willy-nilly will negatively affect the fermentation process, as the microbes within SCOBY thrive best at specific temperatures and pH levels. To ensure a successful fermentation, the tea base has to be adjusted for temperature and pH create a suitable environment for the SCOBY.

SCOBY is added to the tea base in a wide-mouthed container, often a glass jar, to allow for gas exchange and left to ferment for 7 to 10 days at room temperature. During this first fermentation, oxygen has to be abundantly available for Acetobacter, which requires oxygen to grow (it is an obligate aerobe) [7]. However, leaving the container uncovered puts the kombucha at risk for contamination by fruit flies. Covering the jar with a tightly-woven cloth or paper towel and an elastic band can keep out fruit flies while permitting oxygen availability for the fermenting kombucha. The longer the fermentation period, the more vinegary the flavor and the lower the sugar content.

Kombucha undergoing the first fermentation. Photo credit: Amy Selleck (amyselleck/Flickr) 3. Remove the SCOBY. To end the first fermenation, simply remove the SCOBY from the kombucha. From here, there are two options: reuse the SCOBY for another batch of kombucha or store it for later brewing. Reuse: Make another tea base. For the starter liquid, it would be easiest to use the kombucha that the SCOBY was previously removed from. Store: Store the SCOBY in a tea base/starter liquid mixture. This can be kept at room temperature for up to three weeks, depending on the volume of the storage mixture, before the microbes exhaust the nutrients. For longer storage, place the SCOBY mixture in the refrigerator. SCOBY become dormant in cold temperatures, but this does not mean the microbes cease activity altogether. Rather, in dormancy, cell division halts and the microbes’ metabolism slows significantly [9]. In storage, the SCOBY will continue to ferment its storage mixture, albeit at a slower rate than if left at room temperature. To maintain SCOBY viability, replenish the storage mixture every 4 - 6 weeks by removing 50 - 80% of the liquid and replacing that with new sweetened tea [8]. The main idea is to provide continuing fuel for the microorganisms. It is also possible to simply add ¼ cup sugar per quart of storage mixture every 4 - 6 weeks [8], but keep in mind that the dormant microbes are still carrying out cellular functions which require nutrients and water. The stored SCOBY will reduce the volume of its storage mixture, and so additional tea is required to prevent the storage mixture from drying up. 4. Second fermentation. Pour the kombucha into bottles and cap them, leaving the bottles out at room temperature. If a flavored kombucha is desired, this is the step to add flavoring ingredients. Although SCOBY was removed at the end of the first fermentation, not all the microorganisms were attached to the cellulose matrix, especially if the microbes were newly-cloned during that previous fermentation period. There will still be kombucha microbes present to perform a second fermentation. As this second fermentation occurs in a closed system, CO2 produced from the yeast cannot escape the kombucha as it did during the first fermentation. As a result, the kombucha becomes carbonated during this step. Further, the kombucha microbes will continue to metabolize any remaining sugar to produce lactic acid, acetic acid, ethanol, and CO2, so the kombucha will become less sweet but tangier. After 1 to 3 days, depending on how quickly carbonation occurs, store the kombucha in the fridge. This stops fermentation and carbonation because the significantly decreased temperature causes the microbes to go into a dormant state. And voilá! You have your first batch of kombucha!

Photo credit: thedabblist (64636759@N07/Flickr) While making kombucha is a lengthy process that can take up to two weeks to complete one batch, and perfecting the recipe to your own taste will involve making many batches, there is perhaps nothing more satisfying than a successful and delicious kitchen experiment. The process described in this post was based off of kombucha recipes from The Kitchn and Food52. References cited