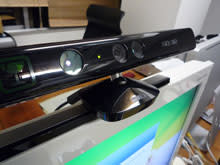 The next generation of video game control is upon us with the release of Microsoft's Kinect--which allows users to control special XBOX 360 games with their entire body. Hackers have been eagerly digging into the device, especially since Microsoft's Shannon Loftis told Science Friday's Ira Flatow that no hackers would get in trouble for finding alternate uses for the Kinect:

"I'm very excited to see that people are so inspired that it was less than a week after the Kinect came out before they had started creating and thinking about what they could do."

Here's a list of some of our favorite, jaw-dropping hacks: Invisibility without the cloak, 3D video, Minority Report-style computing, real-life Star Wars, and the best shadow puppets you've ever seen. 5. Makes the best shadow puppets EVER: Built in a day by Theo Watson and Emily Gobeille, this little hack replaces your hand and arm with a movable bird puppet. You can control the bird, and even make it squawk.

hacked his Kinect to transform a normal wooden stick into a light-saber in real-time, with real light-saber whooshing sounds!

3. Cloak-less invisibility: Kinect hacker Takayuki Fukatsu hasn't revealed details on how he became invisible, but it seems like he probably just overlaid his body with a picture of the room behind him. The effect is still pretty darn cool.

2. Real-time 3D Video: This one might be cheating, since it uses TWO Kinect cameras, but the outcome is simply amazing. Placing the two cameras at a 90 degree angle to each other, he captured video simultaneously and made a manipulable three-dimensional video!

An MIT-based team at the Media Lab Fluid Interfaces Group

, without even needing the glowey-fingertip gloves! The video below is from another group, the multi-touch company Evoluce

, which is working on the same project. Their system seems close to fully developed--the user can click and navigate, and even use an on-screen keyboard.

Science Not Fiction: The Fundamental Problems of Minority Report-style Biometrics