Is That a Gun in Your Pocket or Are You a Size 2?

Radar peers beneath clothes to find weapons—and the perfect pair of jeans. 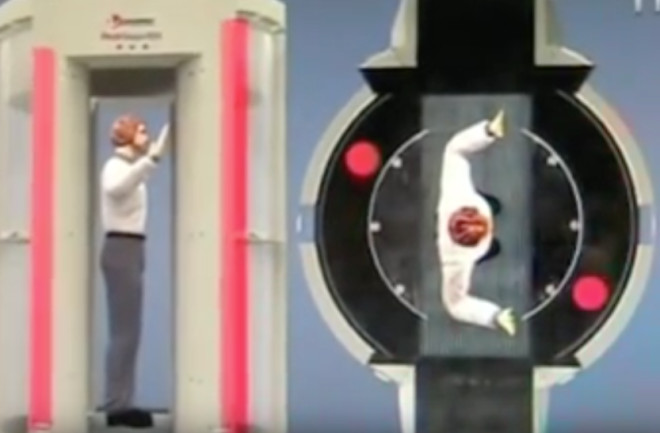 Instead of getting through security by submitting to pat downs at the Phoenix Sky Harbor International Airport, travelers can now choose a more hands-off approach: walking through a full-body screening machine that can peer right through a person’s outfit.

The device was originally created by engineer Doug McMakin and his team at the Pacific Northwest National Laboratory as a means of virtually frisking terrorists. The technology uses radio waves to produce 3-D scans of passengers’ bodies, the same way radar captures images of planets’ surfaces. As passengers stand still with their hands up, two rotating antennas send out radio waves. The waves bounce off the skin and are collected by a receiver. Metals, plastics, and liquids between the skin and the receiver show up in images that are sent to security officials in another room.

McMakin’s system has already made a splash with another crowd: clothing retailers. Machines have been placed at Fashion Bug stores and outlets around the country. The screener, named Intellifit, rests inside a virtual dressing room, a seven-foot-diameter circular enclosure placed in the middle of the store. The device allows customers to get instant printouts of their jeans sizes (see video below).

Before we see more of this technology—in the mall or at security centers—the companies using it may want to alleviate worries from privacy advocates. “Those images reveal not only our private body parts but also intimate medical details like colostomy bags,” Barry Steinhardt of the American Civil Liberties Union says.

McMakin responds that he has no issue with being scanned by the system. He is working on weapons detectors as automatic and accurate as metal detectors. That way, the only thing flashing will be the red and green lights on the screening machine.

Watch the video below to see DISCOVER reporter Boonsri Dickinson get scanned for a personalized pair of jeans.