One of the latest—and most amusing—gizmos in airport security: the air puffer. 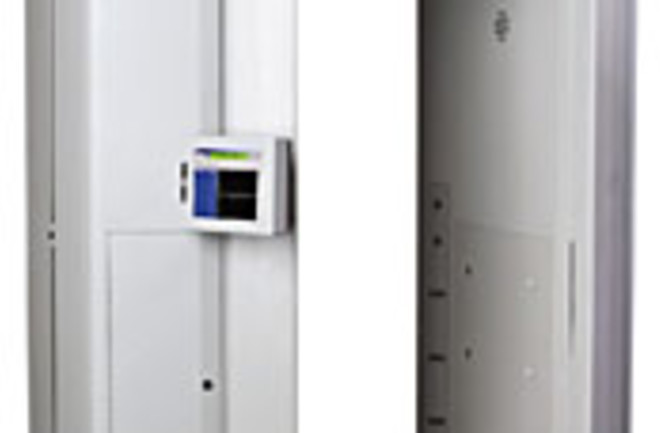 A white chamber about the size of a telephone booth, this futuristic machine looks like it's straight off the set of an Austin Powers movie. Passengers walk inside and stand on black outlined footprints as a flashing red hand signals "stop." Automated glass doors slide closed from the front and behind, cutting off the airport hubbub. After an eerie silence, a robotic female voice announces, "Air puffers on." (Click herefor otherpuffer-portalsounds.) Suddenly, high-pressure bursts of air blast up and down the body, tousling hair, ruffling collars, and evincing giggles. What exactly are these puffers, and why are they blowing up ladies' skirts from coast to coast?

The puffer machine is what the TSA calls an "explosive trace portal­­," a state-of-the-art device capable of detecting traces of explosive residue on a person's body or clothing. Since the summer of 2004, the TSA has installed more than 90 puffer machines in about 35 airports around the country. The puffers are more advanced and less obtrusive than other screening procedures, such as full-body pat-downs, says TSA spokeswoman Anne Davis.

The puff-down works like this: Air jets strategically positioned inside the booth send 37 blasts of air onto the person's body, dislodging particles from the clothing, skin, and hair. The swirling dislodged particles travel upward with the human convection plume, or currents of warmed air that rise around any human body, then get swept into a filter that takes out contaminants like dust, lint, and skin cells.

The resulting vapors are sent to an ion-mobility-spectrometry "trap," where captured molecules are ionized and then blown through a tube containing an electromagnetic field. Each type of ion travels through the field at a certain distinctive speed: the smaller and more charged the ion, the faster it moves and the sooner it arrives at the end of the tube. The ions' flight times are measured and then compared to a database of times for known compounds, including those of bomb ingredients. If explosives are detected, an alarm sounds. While smaller, simpler versions of trace detectors have long been used in airports to analyze cloths rubbed over passengers' carry-on bags, the puffer machine quickly scans the whole person by puffing and then analyzing the samples immediately.

At about $150,000 apiece, the puffer machines are neither cheap nor perfect. After a period of continual use they run into significant maintenance issues, and the manufacturer, General Electric, needs to address these problems before the TSA purchases more, says Davis. (She declined to specify what was wrong with the machines, but The Washington Postrecently reported that after constant use in commercial airports, the device's sensors get clogged with dust.) The TSA has proposed to divert $20 million originally set aside for puffer portals to the upgrading of x-ray technologies.

Despite this puffer rebuff, it looks as if the technology will stick around, at least for a while. The TSA plans to continue using the portals already installed in airports; right now, they are the best and most practical explosive-detection devices available, says Herbert Hill, a chemist at Washington State University and a pioneer in the field of ion-mobility spectrometry. Moreover, puffer machines, which can also be configured to search for narcotics, are now popping up in many places outside of airports: nuclear power plants, correctional facilities, courthouses, and even the Statue of Liberty.