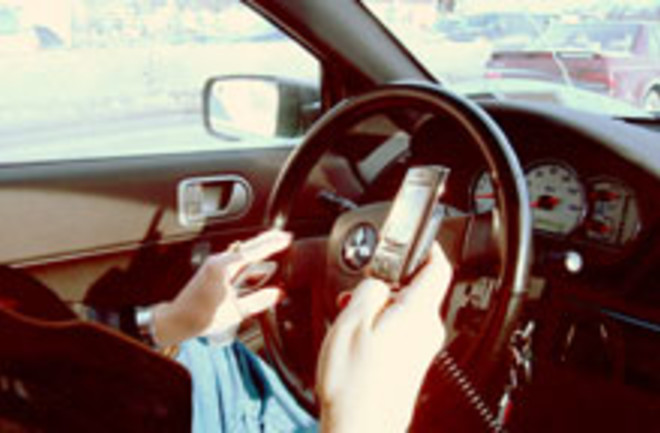 A new smart phone app aims to get you communicating with the drivers around you, and we don't mean yelling choice obscenities through the window or shaking your fist of rage when someone cuts you off. By photographing, typing, or saying a license plate number and state you'll be able to message the driver--if they're also signed up for the service, named Bump. The message recipient can choose how they get their messages, through text or the Bump.com website. Bump launches today on iPhones, and an Android app will soon be ready as well. Venture Beat talked to Bump's CEO, Mitch Thrower about the idea:

Thrower says his social network for cars brings to mind a classic scene in the film American Graffiti.... Actor Richard Dreyfuss sees a beautiful blonde played by Suzanne Somers in a white T-Bird. She blows a kiss at him. He tries to follow her but can’t catch up. Maddeningly, he never sees her again. Oh, if he had only gotten her license plate.

And while the idea of giving drivers more reasons to constantly be on their phones gives most of us the willies, Bump's developers say using their application could encourage a safer diving experience overall, bringing personal accountability to the road--a normally anonymous place. As fun as scolding bad drivers sounds the service can also be used to warn other drivers about low tires, broken tail-lights, car alarms, or headlights left on. Or, of course, we could turn traffic jams into the new singles scene. The company is touting the app as some sort of social network for drivers, but it also has a data-mining trick up their sleeve. Bump wants to offer up its users as targets for advertising, by selling businesses the ability to contact people who frequently drive by their establishments. Bump's VP of technology, John Albers-Mead, explained the idea to Technology Review

"It allows us to track users, it's like putting a cookie on a car," says Albers-Mead, likening his technology to the small files used to track web users and offer functionality like autologins online. Once connected up to Bump's tech, a camera at a store or drive-in burger joint could, for example, showing menu choices similar to those you've selected before. That extra data could be valuable to store owners, Bump say, who could also make use of the messaging functions. "You could register as a fan of the Dodgers and then receive a message welcoming you to the stadium and offering discount vouchers when you visit," says Albers-Mead.

Discoblog: NASA iPhone App Lets You Drive a Lunar Rover (Just Try Not to Get Stuck)