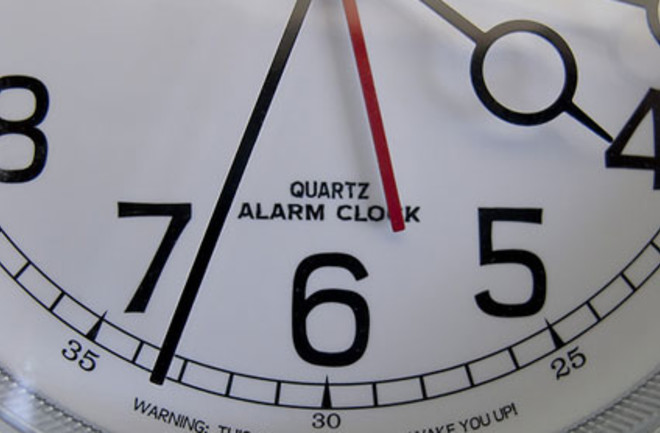 A glitch in the iPhone's alarm software gave many Europeans an extra dose of sleep this morning, when their alarms went off an hour later than expected. While the time on the phone correctly "fell backward" with Europe's scheduled switch from daylight saving time, because of a software bug the alarm function didn't recognize the switch, and all recurring alarms went off an hour later than intended. Frustrated iPhone users took to twitter, said the Daily Mail:

Users of Twitter were also quick to make jokes at Apple's expense today. Garrettc wrote: 'Daddy, do you remember where you were during the great iPhone alarm calamity of 2010?' 'No son, I was asleep'

Siobhan-83 wrote: 'Ben's iPhone alarm didn't go off this morning, used it as an opportunity to tell him younger, newer models aren't always the better option.'

And Jamiei said: 'A whole hour of peace and quiet in the office this morning without any iPhone users courtesy of Apple.'

Hilariously, the bug was discovered a month ago when the exact opposite thing happened in Australia and New Zealand following their "spring forward" daylight switch--everyone got up an hour early. Apple had promised a fix to the problem then, and still claims the bug will be fixed with the release of an update (iOS4.2

) in the coming weeks. But it probably won't come out in time for the American daylight saving switch next Sunday (November 7) night. The glitch is only affecting recurring alarms, and users can get around it when the time comes by setting a single-use alarm--so don't expect the iPhone bug to be an acceptable excuse to sleep in next Monday. Any recurrent alarms created after the switch will work properly, but old alarms will continue to go off at the wrong time. Just another reason to get rid of the time change all together, some say, as the perennial

continue over the benefits

In some countries, such as Britain and Russia, politicians are being asked to consider parliamentary bills suggesting it's time for a change. "It must be rare to find a means of vastly improving the health and well-being of nearly everyone in the population -- and at no cost," said Mayer Hillman of the Policy Studies Institute in Britain, where a bill on DST is coming up for consideration in parliament soon. "And here we have it."

Hillman's study found that time zone changes in Scotland could give residents 300 extra hours of light per year, and that setting the clocks in Britain ahead by one hour in the winter could save 0.3 percent of daily energy demand. Either way, it still won't fix the iPhone's faux pas this morning. Related content: Discoblog: An iPhone App, a Refractometer, an Objectively Perfect Cup of Coffee

DISCOVER: What Do Urban Sounds Do to Your Brain?

DISCOVER: Discover Data: The Technologies We Love to Hate