How Wasps Taught These Drones to Pull Harder 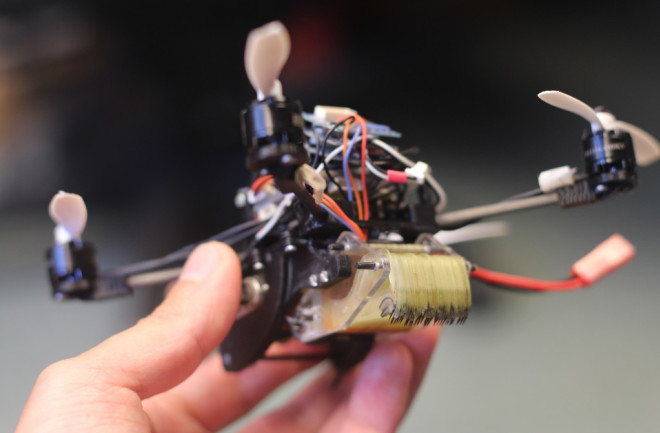 (Credit: ©EPFL/Laboratory of Intelligent Systems) Drones, in the sense of remote controlled flying vehicles, are pretty neat pieces of technology. Even just the various models available for consumers can covertly provide surveillance, offer novel rescue and transportation options and even create high-thrills entertainment. But as the technology advanced there was one balancing act engineers began to face: The smaller and more maneuverable a drone became, the less it could affect its surroundings. Tiny, lightweight flyers can’t drag around heavy weights, say, or open doors. Well, they couldn’t, at least. But a paper out today in Science Robotics describes a new type of drone that can do just that, by borrowing technology from another famous flyer: the wasp.

The team of Standford and Swiss engineers describe a new class of micro air vehicles they dubbed FlyCroTugs (named after mTug robots, which are ground-based machines that work on similar principles.) To get over the “how can light objects manipulate much heavier ones” hurdle, they drew inspiration from wasps, which found a novel solution to the problem.

The FlyCroTug design was inspired by wasps’ ability to latch onto a surface and drag heavy prey. (Credit: Estrada et al., Sci. Robot. 3, eaau6903 (2018))Since their wings alone don’t provide enough force to move heavier objects, wasps first attach themselves to a stationary object, a nearby tree or just the ground, and use that leverage to drag around heavier loads. And FlyCroTugs follow suit. The drones are roughly the size of your hand and weigh just 3.5 ounces, but the authors used them to tug up to 40 times their mass after sticking to a surface. Instead of dragging directly, like wasps, the FlyCroTugs used an “end effector” to connect to a target and a cable or tether to pull on it — another strategy found in nature via Pasilobus spiders. And to get the drones to stick to something in their surroundings, the team outfitted the fliers with dozens of tiny fishhooks for soft fuzzy surfaces, and gecko-inspired adhesive for smooth ones.

So how does it work? The authors actually do a nice job explaining:

(step 1) Fly to a remote object and attach a specialized end effector to it; (step 2) fly some distance away while paying out a tether; (step 3) land, reorient as desired, and anchor to the surface; (step 4) pull on the tether with a large force. This process can be repeated as many times as necessary and by as many FlyCroTugs as needed to accomplish a task.

The drones were equipped with different kinds of winches onboard to provide that tug, and the paper describes various FlyCroTug feats: One successfully lifted a sensor twice its own weight through a dilapidated building, another lifted a simple mass 6 times its own weight in a lab and a pair of drones even worked together to open a door (one stuck to the ground to pull it open, while another stuck to the door itself to pull down the handle). It’s significant progress in the field, but the team acknowledges a few issues that still need to be solved. For one, the perennial problem of battery life: FlyCroTug flight times are only around 5 minutes currently. And the described models were designed for specialized tasks, so deploying such technology in the real world, with its extra variables and unknown problems, would require more versatility from the machines. But still, it’s undeniably cool. Drones are getting more sophisticated, which means we can do even more with them now. As the authors put it, “Many tasks involving low levels of dexterity lie within the force regime of FlyCroTug robots (e.g., remove debris blocking an entryway, open a door, and enter a building).” As with all things drone, it seems, the sky’s the limit.