How To Harvest Uranium from the Ocean 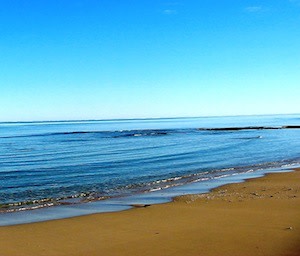 Nuclear power depends on a steady supply of uranium. The good news is that we have at least a hundred years worth of uranium

. The bad news is that both demand for uranium and the price of production are rising---and a hundred years isn't all that long. To reinforce our stock of uranium, researchers have proposed a backup plan: gather it from the sea. For every billion pounds of water in the ocean, there are 3.3 pounds of uranium---we just need to figure out how to extract it. Over at IEEE Spectrum, Dave Levitan describes

an effective technique for harvesting the diluted uranium:

The best method works like this: A polymer substrate—basically, plastic—is irradiated, and then chemicals with an affinity for uranium are grafted onto it. The material is woven into 60-meter-long braids, and these are then brought out by boat to water at least 100 meters deep. The braids are chained to the ocean floor and allowed to float passively in the water, like an artificial kelp forest. After about 60 days, the boat returns and pulls in the adsorbent materials—now sporting a healthy yellow tint from the uranium. The plastic is then brought back to shore, and the uranium is eluted [a chemical extraction method] off. “You get between 2 and 4 grams of uranium sticking to this stuff per kilogram of plastic,” says Erich Schneider, a nuclear engineer at the University of Texas at Austin. “That doesn’t sound like a lot, but it all adds up.”

Although it's certainly reassuring to know that we can easily supplement our other sources of uranium with plastic and seawater, this method is not without its flaws. The proposed system, described at the Philadelphia conference

of the American Chemical Society, would be much more expensive and less energy efficient than traditional uranium mining. And to gather six tons of uranium per year would require a whopping million tons of plastic---which may soon be in limited supply

as well. To read more about the pros and cons of oceanic uranium, check out the full article at IEEE Spectrum