How To Build a Laser Tractor Beam (in Theory) 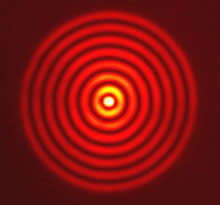 Light is pushy. The physical pressure of photons is what allows for solar sail space missions that ride on sunlight, and what allows for dreams of lasers that will push those sails even faster. And light can trap objects, too: Optical tweezers can hold tiny objects in place. Pulling an object with light, however, is another matter. Though it's counter-intuitive to think you could create backward-tugging force with a forward propagating laser and create a real-life tractor beam, the authors of a new physics paper write that they have shown a way it could be done. Jun Chen's research team says that the key is to use not a regular laser beam, but instead what's called a Bessel beam. Viewed head-on, a Bessel beam looks like one intense point surrounded by concentric circles—what you might see when you toss a stone into a lake. The central point in a Bessel beam suffers much less diffraction than a standard laser, and so scientists can use them for precision operations like punching a hole in a cell.

If such a Bessel beam were to encounter an object not head-on but at a glancing angle, the backward force can be stimulated. As the atoms or molecules of the target absorb and re-radiate the incoming light, the fraction re-radiated forward along the beam direction can interfere and give the object a "push" back toward the source. [BBC News]

Specifically, the team writes, "We show explicitly that the necessary condition to realize a negative (pulling) optical force is the simultaneous excitation of multipoles in the particle and if the projection of the total photon momentum along the propagation direction is small." In simpler terms: You need to find the correct angle to minimize the push of the laser while maximizing the absorption and re-radiation that creates the backward force. Given the "Star Trek" implications of such a find, it's not surprising that this isn't the first time researchers have tried to achieve pull with light:

Last year, physicists at the Australian National University devised a technique to move tiny glass particles nearly two meters across a laboratory. However, the system would cease to operate in the vacuum of space: It requires superheated air to suspend objects. [Smart Planet]

This version doesn't require superheated air, but the effect does only work on small distances for now. Nevertheless, physicist Ortwin Hess calls it a "radical idea."

"It's a bit like a boat moving through water," Professor Hess [says]. "In the eddies you generate as part of that forward movement, there are areas that literally seem to be pulling back. "The ship has a shape, and you get these backward eddies at the side; in a similar way if you have a Bessel beam you have certain areas that do the same thing." [BBC News]

The paper by Chen's team awaits peer review, but you can read it for yourself on arXiv

80beats: Zapping Worm Brains With Lasers Reveals the Duty of Each Neuron

80beats: Maneuvering on a Light Beam: How to Steer a Solar Sail Spacecraft

80beats: How Japan’s Success Reinvigorated Solar Sailing—and What Comes Next