How Firefighters Saved the Birthplace of the Expanding Universe 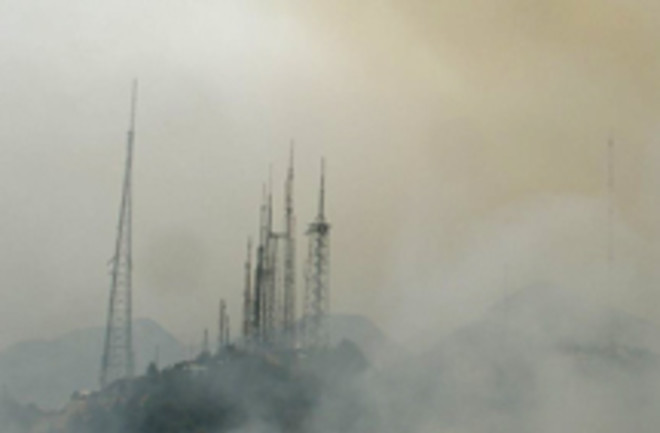 The Mount Wilson Observatory has allowed astronomers to gaze at the heavens for more than a century from a peak in the San Gabriel Mountains, just northeast of Los Angeles, but the devastating conflagration known as the Station Fire that ripped through the Angeles National Forest over the past week had stargazers wondering if the historic facility was about to go up in smoke. The flames got so close at one point that firefighters abandoned the facility, but now L.A. County Deputy Fire Chief Jim Powers has assured astronomers that he foresees “another hundred years for Mount Wilson Observatory.” This is the story of how firefighters saved the birthplace of modern astronomy as well as a virtual forest of communication towers that serve the region [AP].

On Monday night, the scene was grim. The observatory had been hastily evacuated that day, and only two-dozen firefighters stood overnight sentry, positioned along the gloomy perimeters of the observatory and towers. A greater number might have been deployed, but there were more pressing priorities in the urban elevations — the protection of hillside homes [Los Angeles Times]. By daybreak, fire chiefs made the call to retreat from the mountaintop, where firefighters could easily be trapped by the oncoming flames. “It’s not worth dying for,” said Los Angeles County Fire Department Battalion Chief Steve Martin [Los Angeles Times].

But their luck was already turning: the winds were dropping, the temperature was cooling, and the humidity was rising, all of which had a dampening effect on the raging fires. On Tuesday afternoon the fire crews began a massive new defensive effort around the observatory. They called in helicopters to spray the forest with 7,500 gallons of fire retardant chemicals, used two enormous bulldozers to clear brush on the hillsides, and set backfires near the observatory’s buildings. If the fire overran the compound, a last-resort measure would be taken to spray the technology-packed structures with foam. “We do not plan to cover everything with a gooey mess,” said county Fire Deputy Chief James Powers [Los Angeles Times].

In the end, the goo wasn’t necessary. Firefighters waited through the night as Tuesday gave way to Wednesday, expecting the blaze to clime the mountainside before dawn. But the preventive measures had done their work, and the fire never crossed over the observatory’s perimeter.It’s still possible that some damage may have been done. Edward Rhodes, a USC astronomy professor who manages the 60-foot-tall solar observatory, the oldest instrument at Mt. Wilson, said his team manager had to pull out so quickly it’s not clear he had time to stow the telescope’s two main mirrors to protect them from ash and dust. “There could be some contamination inside the dome,” said Rhodes…. The mirrors were just coated with a new aluminum reflecting surface in July. If that was damaged, the observatory might need to do the expensive process all over again [Los Angeles Times]. Mt. Wilson’s web server also went down on Tuesday when backfires infiltrated a box containing telephone lines, but such problems are minor in comparison to what researchers could have lost: everything.

The observatory was built in 1904, and work done there revolutionized our understanding of the universe. Edwin Hubble used observations made at Mount Wilson to show that the Milky Way is only one of many galaxies and that the universe is expanding [SPACE.com]. While the encroaching lights of Los Angeles’s suburbs have reduced its usefulness for some observations, research at Mount Wilson is still a vital, ongoing concern. Just a couple months ago, a Nobel Prize-winning astronomer used Mount Wilson to discover that the star Betelgeuse appears to be shrinking. In 1920, Betelgeuse was the first star to be measured — and it was done at Mount Wilson [AP].