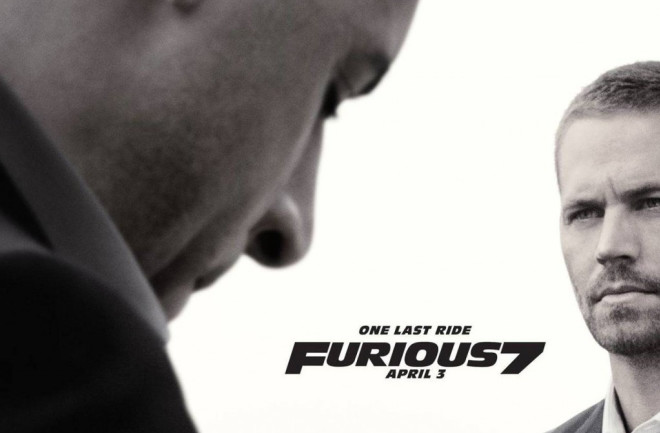 A poster for "Furious 7" featuring actors Vin Diesel and Paul Walker. Credit: Universal Studios Picture a group of mourners surrounding a tombstone within a huge graveyard. Their voices blend together in a respectful murmur of words such as "Miss you so much" and "You always gonna be my brother." Then the imaginary tombstone's face displays an image of actor Vin Diesel, his head bowed as if in grief, standing opposite deceased actor Paul Walker. The tagline "One last ride" appears above the film title "Furious 7." The seventh film in the high-octane "Fast and Furious" franchise may appear to be an unlikely vehicle for memorializing Paul Walker, who died in a car crash on Nov. 30, 2013. But the real-life relationships of the close-knit "Fast and Furious" cast and the running theme in the films about the importance of family make "Furious 7" a surprisingly suitable vehicle for sending off Walker in style—especially given that the actor's brothers helped finish filming the movie in his place. In that spirit, Walker's official Facebook page has become an online memorial to the deceased actor that also promotes the newest film in the "Fast and Furious" franchise. Fans flock to Paul Walker's page to both pay their respects and get hyped for the actor's last appearance in the series. "A lot of my research has found that postmortem social networking practices are not sanctified," said Jed Brubaker, a Ph.D. candidate in the department of Informatics at the University of California, Irvine. "While there is a kind of reverence that enters into these spaces, it doesn’t have the overwhelming sense of a graveyard. Instead, what we find is a blend of a familiar social media genre form of communication intermixed with a more traditional funerary style similar to how you would talk at a funeral or gravesite."

The official Facebook page of actor Paul Walker, who died in a car crash on Nov. 30, 2013. Brubaker has collaborated with Facebook in studying death and social media since last year, but has conducted research on such topics for the past six years. While his research hasn't focused specifically on celebrities, he sees many similarities between the fan comments left on Paul Walker's Facebook page and the comments left on the Facebook profiles of ordinary people who have passed on. The rise of Facebook and other social networks has changed the cultural way that people approach death, Brubaker explains. When Facebook profiles linger on beyond the lives of their owners, they allow people to maintain a continuing relationship with the deceased. Friends and family can often still post to the dead person's profile, send them messages and browse through the photos of the deceased. Facebook allows for such relationships with deceased Facebook users through its "memorialized account" feature and "legacy contact" option that allows people to designate someone to manage their memorialized account after they die. "Social media is a place where the kinds of things you could do to interact with people while they were alive are still available after they die," Brubaker said.

When Paul Walker died on Nov. 30, 2013, a person using the "Team PW" name posted the news to his official Facebook page. Paul Walker's Facebook page isn't exactly the same as any given person's personal profile. For one thing, it's a Facebook page tailored for businesses, brands and organizations rather than personal Facebook profile. Walker seemed to personally post messages to the Facebook page every now and then. For example, his last message wished people a happy Thanksgiving. But most messages were posted by a team of publicists under the collective name "Team PW." The nature of relationships with a celebrities also makes a difference in how fans continue to interact with Walker's Facebook page. It's probably safe to assume that most never actually got the chance to meet Walker in person and form a personal connection. Fans grieved for Walker, but the nature of their relationship with him through social media didn't necessarily change much. "The ways that someone can be a fan are still available after Paul Walker has died," Brubaker said. "In the case of a celebrity death, the individual relationship to the deceased hasn’t changed because they never met in real life."

Comments on Paul Walker's Facebook page. One thing that people can find "incredibly distressing" is when a memorialized Facebook profile posts a status update. Even if the family member or another legacy contact signs the message, the appearance of a dead person's profile posting a message can still seem haunting to the deceased's Facebook network, Brubaker explained. He added that the team managing Walker's Facebook page seems to try avoiding such confusion by signing all messages with "Team PW" and avoiding the use of first person pronouns such as "I" or "We." The release of "Furious 7" and Walker's continued social medial presence have helped keep the actor in the public eye. "Fast and Furious" castmates such as Vin Diesel and Jordana Brewster have made emotional speeches remembering Walker in the run-up to the release of the latest film. https://www.youtube.com/watch?v=zMr4B05eDiM At the same time, Walker's Facebook fan page maintains almost 40 million "likes" and continues to attract thousands of "likes" and "shares" for each new status update post. A survey commissioned by Variety last year showed that Walker was more influential than living Hollywood celebrities among Americans between the ages of 13 and 18. Most deceased people's Facebook profiles won't attract nearly as much attention as the Facebook fan pages of celebrities. But just having that digital presence after death allows for each individual's "fans"—family and friends—from all different geographic locations to continue celebrating and remembering the deceased for a long time afterward. Many family and friends return year after year for certain anniversaries or other events, Brubaker said. "One thing I find interesting is how, by virtue of us all having pages or profiles that remain on Facebook or other social media platforms, we all get a micro form of celebrity in a sense," Brubaker said. "That is a substantial difference you can see social media having on everyday American deaths."

More From Discover
Mind
What Foods Can Give You Nightmares?
Mind
Nostalgia and Thinking About the Future Can Be Good For You
Health
Could COVID-19 Be Changing Who We Are?
Health
Decorate For the Holidays Early and it Might Improve Your Mood
Mind
Can't Resist a Black Friday Deal? Here's Why
Mind
What Is Dissociative Identity Disorder?
Recommendations From Our Store
My Science ShopDiscover STEM Kits
My Science ShopDiscover 2022 Calendar
My Science ShopStrange Science
My Science ShopElements Flashcards
Shop Now
Stay Curious
Join
Our List