Hot Tech to Aid the Hunt for a Parking Space 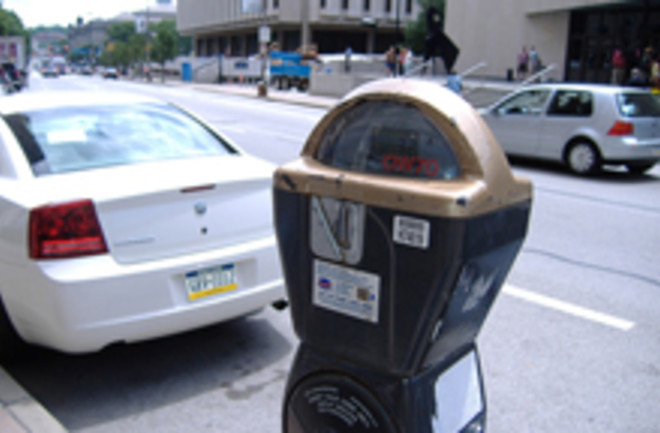 How much time and energy is wasted as drivers circle around blocks and creep down streets, on the prowl for open parking spots? Burning fuel, they simmer silently in their seats, running late for work and appointments. Thankfully, technology has some solutions to ease the pain of finding parking. Engineers Marco Gruteser and Wade Trappe of Rutgers University have combined ultrasonic sensors, GPS receivers, and cellular data networks to create a handy and ultra-cheap "parking-spot finder." Their system distributes the task of finding vacant parking spots to sensors placed on a number of roving vehicles, and then combines the info to make a map of all the available parking in a region. That map could theoretically be accessed through smart phones or dashboard navigation devices. Technology Review reports:

The engineers devised a prototype of a sensing platform using a $20 ultrasonic sensor that reports the distance to the nearest obstacle and a $100 GPS receiver that notes the corresponding location. They connected both to a lightweight PC with a Wi-Fi card to transmit the data to a central server.

The researchers developed an algorithm that detects parked vehicles based on the ultrasonic sensor's readings of obstacles. Based on the objects' width and depth, the readings were further refined to filter away parked bicycles and trees. Then, they integrated this data with maps, to pinpoint the exact location of available parking. The engineers report that they were accurate 95 percent of the time finding slotted parking spaces using this algorithm, and were right 96 percent of the time detecting unslotted parking. The researchers say that as cars like taxicabs drive around busy areas, they could use the sensors to collect data. The information collected by cabs could be sent to a large central server using cellular networks, and all that info could then be combined to create detailed maps of available spaces. The researchers say this information could be sent back to cars with commercial GPS receivers, if a deal is struck with the navigation companies. If employed, the Rutgers team's cheap networking sensors could end up saving cities like San Francisco millions of dollars in "smart parking infrastructure." Already, the SFpark project in San Francisco allows real time information on parking at metered spaces. The fixed sensors used in that system cost $500 to install and maintain each year--adding up to a tidy $3 million annually. The Rutgers engineers estimate that they could outfit 300 San Francisco cabs for about $200,000, and they say that cab fleet could cover the city's entire downtown. Related Content: Discoblog: As in Lake Wobegon, Behind the Wheel, All Drivers Feel Above Average DISCOVER: Drinking vs. Talking DISCOVER: Driving Simulator DISCOVER: Do Cell Phones Put Blinders on the Driver? DISCOVER: The Physics of . . . Changing Lanes