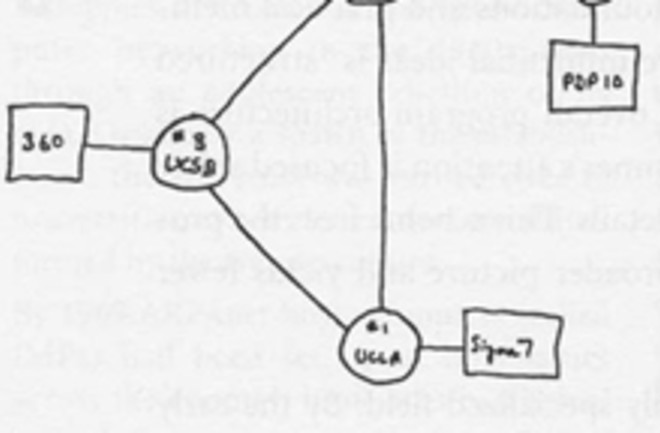 Yes, in early September we sent the Internet our birthday best wishes, noting that it had been 40 years since computer scientists at the University of California, Los Angeles connected two computers via a 15-foot cable, allowing for the transmission of data between them. But it wasn't until October 29, 1969 that the first message passed between two different computer nodes, one at UCLA and the other at Stanford University. The message that researcher Leonard Kleinrock

intended to send to Stanford was "login" but Kleinrock was only able to type "lo" before the system crashed. On his second attempt, the message went through successfully [ABC News].

With that, a net was born. The system dubbed ARPANET, which was funded by the U.S. Department of Defense, would lead directly to the Internet that we know, love, despise, and rely on utterly today. To date,

over 1 billion people are online, and last year, Google announced that it had detected over 1 trillion pages [PC World].

Vinton Cerf, an Internet pioneer and the current Chief Internet Evangelist at Google says the online world will continue to evolve in ways we can barely imagine, but which serve humanity's basic drive to communicate.

"Don't let anyone tell you that information is power.... It's information-sharing that's power" [LiveScience]

, he says. Related Content: 80beats: Happy 40th Birthday, Internet! 80beats: 40 Years Ago Today, the World Saw Its First Personal Computer 80beats: “Interplanetary Internet” Will Soon Bring Twitter to the ISS DISCOVER: The “Father of the Internet” Would Rather You Call Him “Vint” DISCOVER: The Emoticon Turns 25