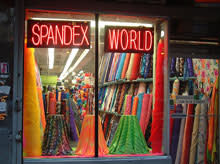 A "sustainable chemical" company called Genomatica has developed a way to use sugar and genetically engineered bacteria to produce a common industrial chemical that's usually produced using petroleum, and which is found in everything from Spandex to car bumpers.

By using sugar from sugar cane as a feedstock, industrial chemical companies can get a cheaper alternative to petroleum-derived chemicals, while investing in processes that are less polluting and nontoxic, said Genomatica CEO Chris Gann [CNET].

Genomatica produces the chemical, 1,4-butanediol (BDO), by feeding pure glucose derived from sugarcane to E. coli bacteria, which has been engineered to produce BDO.

"We have engineered the organism such that it has to secrete that product in order for it to grow," says [company president] Christophe Schilling.... "The interests of the organism are aligned with our interests: It grows faster when it produces more" [Scientific American].

Other green technology companies are experimenting with using bacteria to turn sugar or cellulose into biofuels, but thus far few companies have tackled the chemical industry. However, rising oil prices are having a ripple effect, and

industrial microbiology began to gain momentum a few years ago. Historically, microbiologists concentrated on food or pharmaceuticals. Exploiting bugs for other purposes, though, makes a lot of sense. For one thing, you don’t have to worry about FDA testing [Greentech Media].

Genomatica executives say that their

process will eventually be cheaper than conventional techniques even if the price of oil drops to $50 a barrel. The annual global market for BDO is about 3 billion pounds, or $4 billion; it's used in plastics, solvents, pharmaceuticals, automotive components and apparel fibers [Forbes].

The company plans to build a pilot plant to prove its technology on a larger scale, but will then license its process to industrial chemical manufacturers.